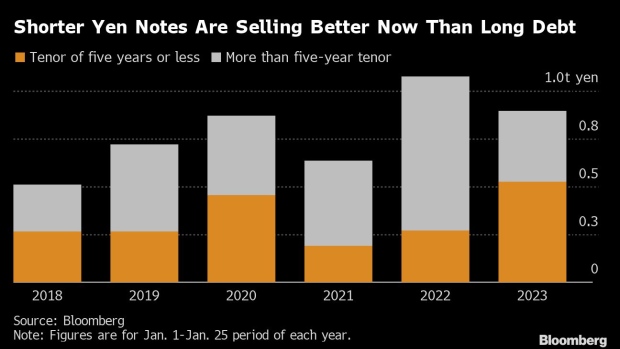 (Bloomberg) -- Growing expectations that the Bank of Japan will drop its yield-curve control policy sooner rather than later are triggering a 94% surge in sales of yen bonds with shorter maturities that are less vulnerable to future interest-rate action.

A possible future BOJ policy change would lead to bigger losses for debt with longer maturities. Sales of Japanese corporate bonds maturing in more than five years have plunged by more than half so far this month.

Worldwide issuance of longer company notes, by contrast, has dropped at a slower pace of 13% so far in January amid bets the Federal Reserve will soon end its tightening cycle. As for the BOJ, having unexpectedly doubled its yield cap target on 10-year bonds in December, it pushed back against bets of further change by sticking to its stimulus framework this month.

“The yield curve has not normalized as intended by the central bank, but the kink has become even bigger since the December meeting,” Christoph Siepmann and Florian Spaete at Generali Insurance Asset Management wrote in a report. “We do not rule out the possibility of fresh attacks in the coming weeks, forcing the BOJ to defend its policy.”

Japanese borrowers have issued 527 billion yen ($4.1 billion) this month of yen notes due in five years or less, a nearly doubling in deals that marks the busiest start of the year since 2011, Bloomberg-compiled data show. Similar-tenor debt sales, meanwhile, have increased just 3% globally.

Nissan Motor Co., which raised 60 billion yen with three-year and five-year debt deals, and East Nippon Expressway Co. have been among the recent issuers of shorter debt. They’ve sold longer bonds before: Nissan issued seven-year and 10-year notes in 2016, while East Nippon Expressway also sold debt with similar tenors in November, according to Bloomberg-compiled data.

Sign up for The Brink, our newsletter chronicling corporate bankruptcies, distressed debt, and turnaround stories, delivered Tuesdays and Fridays.

(Adds a link to an interview story with MUFG markets chief.)