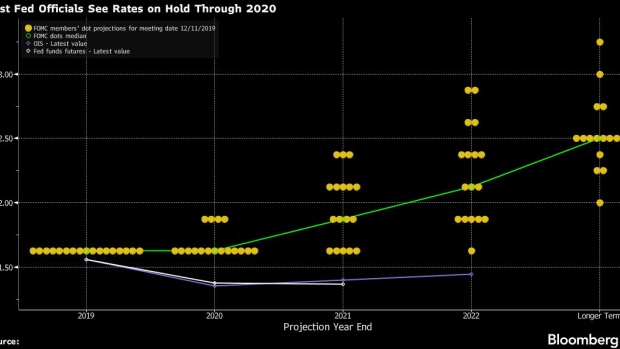 “The U.S. economy is currently doing well, with real GDP growth near trend, unemployment near record lows, and inflation low and stable,” George said in the prepared text of speech she’s scheduled to deliver Tuesday in Kansas City. “Keeping rates on hold for now is appropriate in my view as we assess the economy’s response to last year’s rate cuts and monitor incoming data.”

After cutting three times in 2019 to provide protection against trade uncertainties and a slowing global economy, most Fed officials have signaled they are in no rush to raise or lower their benchmark rate any time soon.

The median forecast of their rate projections released last month showed policy on hold through 2020, keeping the central bank on the sidelines during a U.S. presidential election year. Just four of 17 Fed officials signaled a quarter-point increase this year.

George doesn’t hold one of the rotating votes on the policy-setting Federal Open Market Committee this year. She held a vote last year and dissented against all three rate cuts.

George didn’t tip her hand on whether she believed the next move for policy makers is likely to be up or down. She said the central bank must be prepared to reverse last year’s cuts if headwinds connected to trade and sluggish global growth fade, but also to cut further if a slowdown in investment spending in the U.S. spills over to the consumer.

She added that her focus in coming months will be, in part, on the consumer.

“Because the consumer is critical to the ongoing expansion, monitoring a number of fundamental factors that drive consumer spending will be important this year,” she said.

The Kansas City Fed chief noted a recent widening between consumer expectations and their view of current conditions, a development that in the past has preceded a drop-off in household spending.

George also worried aloud about the Fed’s limited room to fight another recession, with the lower bound of the federal funds target range currently at 1.5%.

With such little room to maneuver, she added, “policymakers are likely to find themselves looking deep into the policy toolkit to fight future recessionary shocks.”

To contact the editors responsible for this story: Margaret Collins at mcollins45@bloomberg.net, Alister Bull, Vince Golle