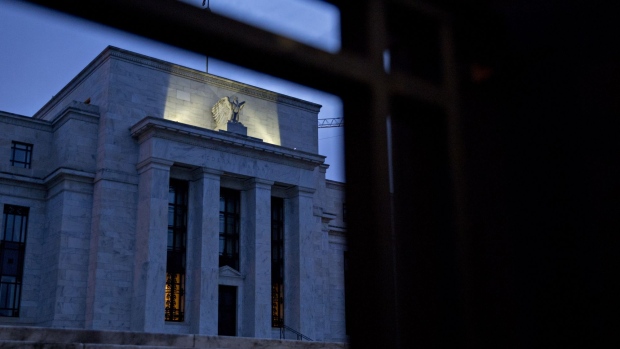 (Bloomberg) -- The Federal Reserve signaled that any reduction in its balance sheet -- when and if that takes place -- will mainly stem from simply not reinvesting maturing bonds rather than selling its holdings outright.

The monetary authority on Wednesday released a statement outlining its principles for cutting the size of its balance sheet, a process it said would start only after it begins raising its overnight borrowing benchmark.

The last time the Fed undertook so-called quantitative tightening, from 2017 to 2019, it set monthly limits to how much it would allow to roll off without being replaced by other securities. This time around, there has been speculation that it might need to actually sell assets at some point, although the newly released principles suggest they are inclined not to.

“There was some tail risk out there of asset sales that I think should be largely diminished with this statement,” Blake Gwinn, head of U.S. rates strategy at RBC Capital Markets, wrote in a note following the decision. The principles drive home the idea that the Fed is not trying to engineer a steepening of the curve, according to Gwinn.

The Fed emphasized that it sees changes in the fed funds rate as its primary means of adjusting monetary policy.

The central bank will determine the timing and pace of reducing the size of balance sheet reductions in order to meet its inflation and employment goals, the Fed said. Fed Chair Jerome Powell did not specify the timing and pace of balance sheet reduction, noting that policy makers were still debating the issues, but did indicate it could be sooner and faster than the last time it did QT.

The committee did however say that it is prepared to adjust any of the details of its approach to reducing the size of the balance sheet in light of economic and financial developments.

It also said that, in the longer run, it intends to mainly hold Treasuries in its portfolio. It currently holds both Treasuries and mortgage bonds.