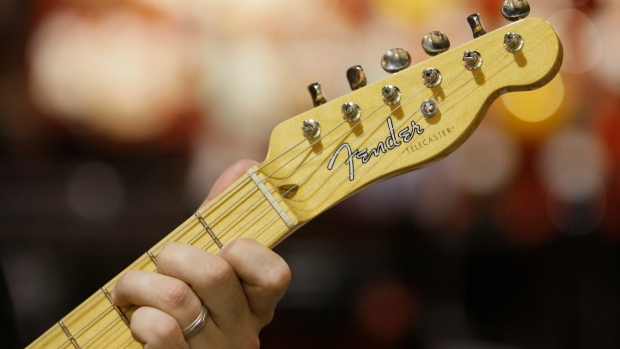 An employee plays a Fender Telecaster guitar at a Best Buy in Downers Grove, Ill., on Friday, July 25, 2008. , The Canadian Press

Fender, the historic guitarmaker for rock legends Jimi Hendrix and Eric Clapton, deliberately set minimum prices to guarantee profit margins on its iconic instruments, according to the U.K.’s competition watchdog.

From 2013 to 2018, Fender Musical Instruments Europe Ltd. allegedly ran an illegal policy of resale price maintenance, requiring guitars to be sold at or above a minimum figure, restricting customers who shop around from finding a better deal, the Competition and Markets Authority said in a statement on Tuesday.

The CMA says it takes the violations “very seriously because it removes one of the benefits of the internet of making it easier to quickly find a better price by shopping around,” CMA Senior Director Ann Pope said in the statement. “It stops online retailers from selling at the prices they want to, and this then leads to higher prices for customers.”

The CMA in August hit Casio Electronics Co. with a 3.7 million-pound (US$4.5 million) fine for operating a similar policy for digital pianos that broke competition law. With an estimated 40 per cent of the 440 million pounds in U.K. musical instrument sales now done online, according to the CMA, British music-fans count on web searches to get a better deal.

Fender is famous for its Stratocaster electric guitar, used not just by Clapton for his famous opening chords on his hit “Layla” but more recently by guitarists like U2’s The Edge. The Stratocaster gained a measure of immortality when Hendrix set fire to one live on stage at the 1967 Monterey Pop Festival, before smashing it to pieces.

The CMA will wait to hear any response from the company before reaching a final decision on whether Fender breached competition law.

“Fender is cooperating fully with the CMA’s investigation and we are reviewing the provisional findings,” Fender said in a statement. “Due to the ongoing legal process, we will not comment further at this time.”