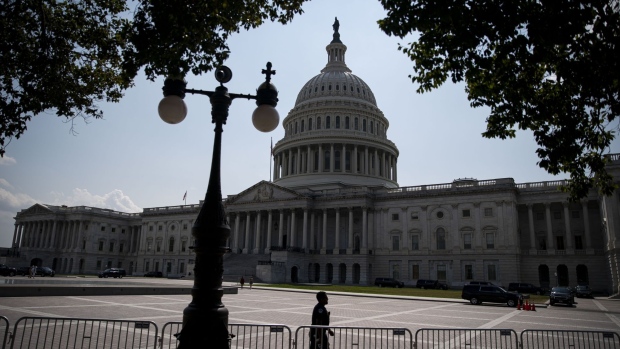 A U.S. Capitol Police officer walks past the U.S. Capitol in Washington, D.C., U.S., on Monday, July 26, 2021. Senators negotiating a $579 billion infrastructure package are aiming to finish negotiations early this week, under pressure from colleagues to salvage an August recess and to allow the Senate to turn to preventing a government shutdown and debt ceiling default in the fall. , Bloomberg

(Bloomberg) -- The heads of BlackRock Inc., Blackstone Group Inc. and Morgan Stanley are among chief executive officers who wrote to congressional leaders on Monday urging them to move swiftly to pass a bipartisan infrastructure bill that senators and the White House are negotiating.

The letter -- signed by more than 140 executives -- came as Senate infrastructure talks suffered a setback Monday after Republicans rejected an offer meant to address all outstanding issues from the White House and Democrats, calling into question goals of passing a $579 billion measure before Congress’s August recess.

The effort was organized by the Partnership for New York City, an influential group of corporate leaders. Bloomberg LP, the parent company of Bloomberg News, is a member of the group but did not sign the letter.

Some of the signatories are allies of President Joe Biden, including Microsoft Corp. President Brad Smith, 32 Advisors Llc CEO Robert Wolf and Penny Pritzker, chair and founder of PSP Capital Partners Llc, all of whom raised money for Biden’s 2020 campaign. Pritzker also served in President Barack Obama’s cabinet as commerce secretary. Others, such as Schwarzman, were vocal supporters of former President Donald Trump.

The plan that lawmakers and the Biden administration have drafted “reflects priorities shared by labor, business and state and local governments, as well as the American people,” the executives say in the letter. “It will leverage significant private investment and generate a strong return for the federal government.”

Other business organizations, including the U.S. Chamber of Commerce and the National Association of Manufacturers, have also called on lawmakers to pass an infrastructure bill. Last week, the leaders of those groups and of labor unions met with Biden at the White House to emphasize the support the bill has from two sides that usually sit on the opposite sides of negotiating tables.