Fitch Ratings Inc. downgraded Hong Kong as an issuer of long-term, foreign currency debt for the first time since 1995, saying that the territory’s recent political turmoil raises doubts about its governance.

The rating was lowered to AA from AA+ with a negative outlook, the company said in an emailed statement Friday. The last Fitch downgrade of Hong Kong took place before the return of the former British colony to China.

Large-scale protests and unrest in the city have unnerved investors and raised the prospect of capital outflows from the financial hub, long seen as a safe haven. Almost three months of protests in the city have weakened an economy that had already been hit hard by the ongoing trade war between the U.S. and China, the city’s two biggest trading partners.

“Months of persistent conflict and violence are testing the perimeters and pliability of the ‘one country, two systems’ framework that governs Hong Kong’s relationship with the mainland,” Fitch said in a statement. “The gradual rise in Hong Kong’s economic, financial, and socio-political linkages with the mainland implies its continued integration into China’s national governance system, which will present greater institutional and regulatory challenges over time.”

“Ongoing events have also inflicted long-lasting damage to international perceptions of the quality and effectiveness of Hong Kong’s governance system and rule of law, and have called into question the stability and dynamism of its business environment,” Fitch said.

Hong Kong Chief Executive Carrie Lam disagreed with Fitch’s downgrade, as the “one country, two systems” framework and the city’s spirit of rule of law haven’t been weakened by the months of turmoil.

The downgrade had little impact on the city’s financial markets, with the MSCI Hong Kong Index trading 0.7 per cent higher and the local dollar little changed.

“Hong Kong is definitely entering an economic recession, as the protests deal a blow to the city’s tourism and domestic consumption,” said Iris Pang, an economist at ING bank NV. “But I don’t think the issues of demonstrations and weak governance will last forever, and the financial industry will remain stable. So the situation won’t be so bad in the longer term.”

Sentiment among the city’ manufacturers worsened significantly in July and August as city-wide protests escalated in earnest while the trade war also showed no signs of slowing down. Hong Kong’s economy has slowed sharply so far this year, with weakness across its most important industries including export trade and retail. 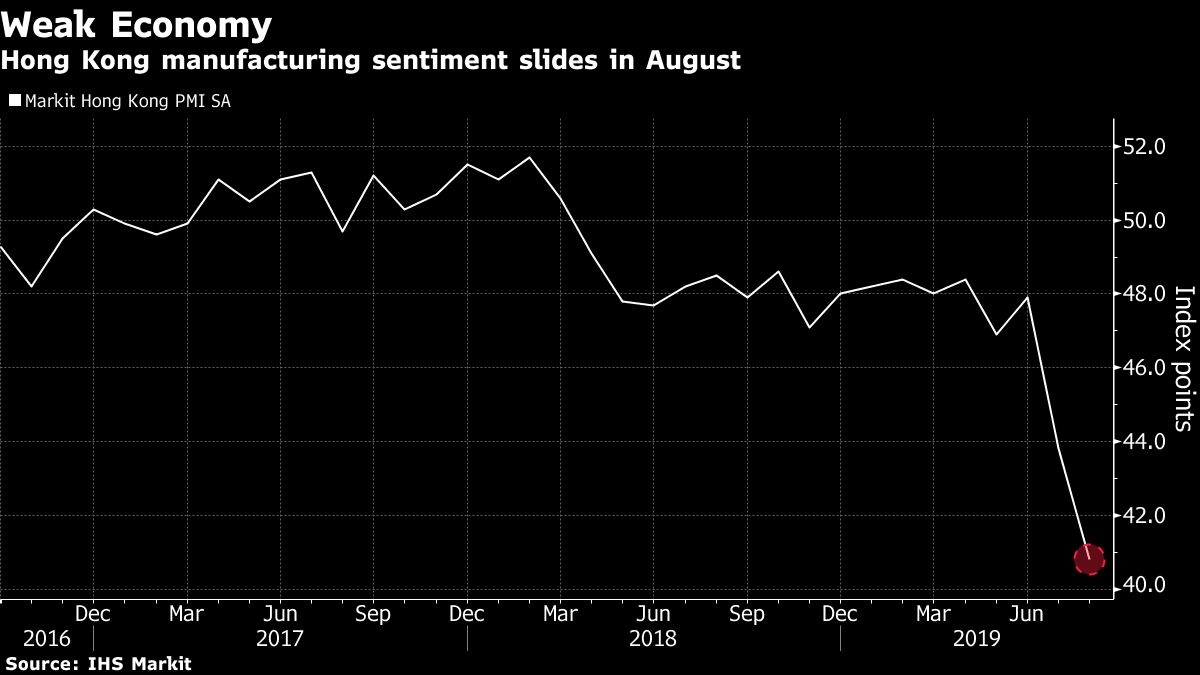 The closer integration of Hong Kong with China is consistent with narrowing the difference between the ratings of the two, Fitch argued. It currently rates mainland China at A+ with a stable outlook. Hong Kong is rated at least two spots above China by all three of the major rating companies.

S&P Global Ratings last week said that despite the turmoil, it believed that the long-term rating was well-supported at the current level of AA+ with a stable outlook.

“The high-income Hong Kong economy, the government’s sizable fiscal reserves, and the economy’s strong external position” provide support for the current rating, analysts Kim Eng Tan and Rain Yin wrote in a research report. However, the “strong credit fundamentals could erode over time if weak economic performance persists and if fiscal flexibility and performance are structurally impaired.“

“The downgrade is a precursor of things to come, especially if the current trend continues," said Jeff Ng, chief Asia economist at Continuum Economics in Singapore. "This may pose more downside risks for the economy."

--With assistance from Gregor Stuart Hunter.