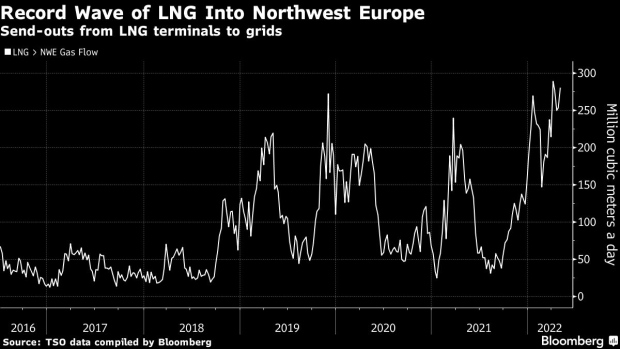 The European Union is pushing to slash Russian gas imports in favor of more LNG, but the increase in such imports is stretching the ability of the region’s infrastructure to handle the volumes until more facilities are built. LNG imports hit record-high levels this month in key northwest European markets, ship-tracking and port data show.

Europe has become the most lucrative LNG market this year amid worries over Russia cutting pipeline supplies to the region. Also, muted demand in Asia due to ample stockpiles and Covid-19 outbreaks has weighed on prices there. That’s led to LNG suppliers offering cargoes to Europe at unprecedented discounts to win business, according to traders in the market.

The super-chilled fuel, which is transported overseas by tankers, is a crucial tool for countries looking to wean themselves off Russian gas. Poland and Bulgaria -- who saw their supplies from Russia turned off on Wednesday -- are among those planning to raise their LNG consumption. The problem is that capacity is already stretched and it takes time to build or expand plants.

Some LNG suppliers have offered cargoes to Europe at discounts of more than 20% to benchmark gas prices to secure slots at terminals, which when available are being snatched quickly, traders said. If more keeps arriving and using up terminal capacity, discounts may further expand as tankers will be forced to queue outside ports or even divert to alternative destinations.

Russia’s halt of flows to Poland and Bulgaria may provide a further boost to LNG demand, and highlights the risk of tighter supplies. While European gas futures have gained this week amid concerns over supply, they remain well below a peak seen in early March.

The discounts being seen in LNG are “in response to European terminals hitting max capacity,” shipbroker Fearnleys A/S said in a report.

“Considering the Russo-Ukrainian conflict and Russia recently cutting exports to Poland, Bulgaria, and maybe others in the coming weeks, it’s expected that any arb to Asia going forward would be limited,” it said, referring to the price difference between Europe and Asia.

Suppliers are offering LNG cargoes to Europe at a discount of $6 to $8 per million British thermal units to benchmark prices of Dutch gas, traders said. That’s a discount of more than 20%. Bids from buyers saw cargoes priced as much as $10 below the benchmark, they said.

Spark Commodities’ SparkNWE basis, which assesses physical LNG cargoes delivered into terminals in northwest Europe on a DES-basis, expressed as a differential to the Dutch TTF benchmark, was at minus $4.93 for May delivery as of last Thursday. This week’s assessment will be published later Thursday.

“Increasing discount to TTF demonstrates the value the market is placing on European regas capacity at a time where LNG flows are increasingly directed to northwest Europe,” said Tim Mendelssohn, managing director of Spark Commodities.