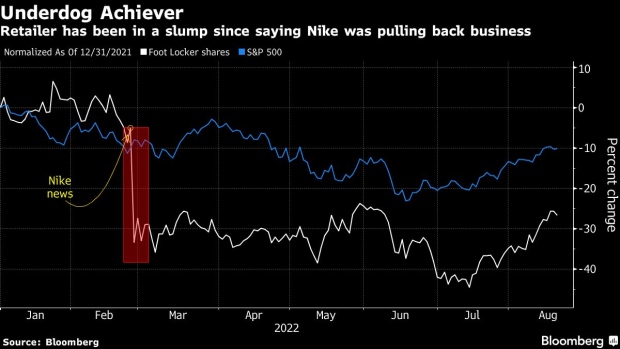 (Bloomberg) -- Foot Locker Inc. jumped after naming retail industry veteran Mary Dillon to be its next chief executive officer in a move that one analyst called a “huge win” for the company.

Dillon, formerly the CEO and executive chair of Ulta Beauty Inc., will replace Richard Johnson, who is retiring, Foot Locker said Friday in a statement. Dillon will also become a member of the athletic-wear retailer’s board. Both appointments are effective Sept. 1.

Shares of Foot Locker rose as much as 25% in New York trading, their biggest gain in almost five years. The company also reported fiscal second-quarter earnings that beat analysts’ estimates while trimming its sales outlook for the year and saying profit will be at the lower end of its original forecast range.

Dillon is “beloved” by Wall Street and her joining Foot Locker is a “huge win” for the company, Evercore ISI analyst Warren Cheng said in a note to clients.

The news drove analysts at Bank of America to upgrade their rating on Foot Locker shares to neutral from underperform. They called it a “thesis-changing move given Dillon’s strong reputation in the industry.

A change at the helm may be exactly what Foot Locker needs to revive its image with investors. The stock plunged in February after the company said industry giant Nike Inc. was pulling back some of its business. The shares have lost more than a quarter of their value this year, and UBS AG analyst Jay Sole said ahead of Friday’s earnings report that sentiment was likely to remain weak even if Foot Locker raised its guidance.

Johnson’s career at Foot Locker has spanned three decades, including almost eight years as CEO. He is 64 years old.

His replacement, Dillon, has decades of experience working for and running consumer companies. While at Ulta, she helped the brand become a go-to shopping destination for teens and made a deal to place Ulta shops in Target Corp. stores. She also led global marketing for fast-food behemoth McDonald’s Corp. for more than four years.

“We’re thrilled about the choice because Mary is one of the best operators in retail over the past decade with an incredible track record across digital, customer experience and innovation,” Cheng said, noting that Dillon likely had a lot of opportunities available to her.

Foot Locker’s board has determined that the chair and CEO roles should be separated. Dona Young, the lead independent director, will become nonexecutive chair effective Feb. 1. Johnson will continue as executive chair through Jan. 31 and will step down from the board at that time.