Ford Motor Co. reduced its full-year forecast due to a debilitating computer-chip shortage that has crimped vehicle production, a crisis the automaker now sees extending into next year.

A global shortfall of critically needed semiconductors has forced the entire automotive industry to cut output, leaving thin inventories on dealer lots just as consumers emerge from COVID-19 lockdowns. Ford expects a US$2.5 billion hit to earnings due to scarce chip supplies, which it previously characterized as a worst case scenario.

“There are more whitewater moments ahead for us that we have to navigate,” Chief Executive Officer Jim Farley said Wednesday on a conference call. “The semiconductor shortage and the impact to production will get worse before it gets better.”

Ford now expects to lose about 50 per cent of its planned second-quarter production, up from 17% in the first quarter. And Farley said the problem could stretch into 2022.

All told, the chip shortage will likely reduce production by 1.1 million vehicles this year, John Lawler, the company’s chief financial officer, said on a call with reporters. That marks a significant deterioration from a previous forecast for lost output of 200,000 to 400,000 vehicles.

The lost sales from lower production will weigh heavily on full-year earnings. Ford now projects US$5.5 billion and US$6.5 billion in adjusted earnings before interest and taxes for the year. The company previously said chip losses in 2021 could be as little as US$1 billion, which would result in earnings of US$7 billion to US$8 billion.

Shares of the company fell as much as 4.3 per cent in aftermarket trading. They closed regular trading down 0.5 per cent to US$12.43. The stock has gained about 41 per cent so far this year. 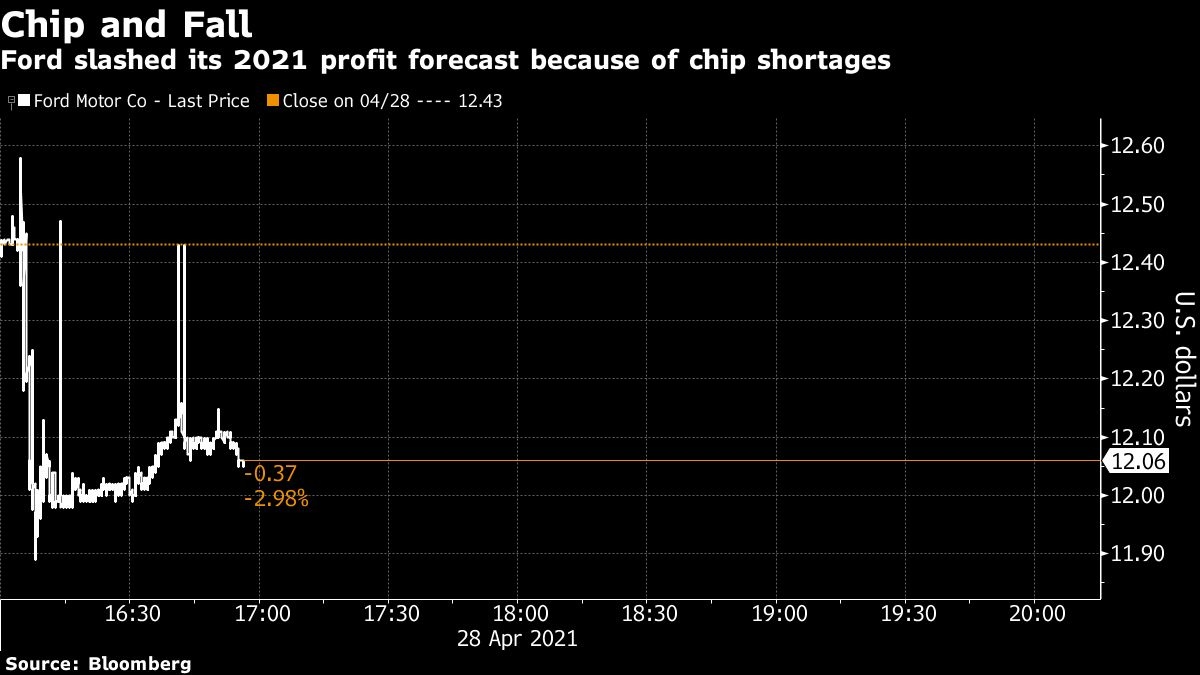 The impact on production has been widespread. A Ford factory in Kansas City that builds its top-selling F-150 truck and Transit van is in the midst of a month-long shutdown. The company’s factory in Chicago that builds the Explorer SUV has been shut since early April and isn’t set to resume production until the middle of next month.

Even Ford’s highly profitable pickup factory in Dearborn, Michigan, had to close for two weeks this month. The result is scarce stocks of vehicles on dealers’ lots, leaving confident consumers wanting.

“The second quarter will be the worst financial impact from the semiconductor shortage,” said David Whiston, an analyst with Morningstar. “In the first quarter they were able to put some Band-Aids on certain things and still make the vehicles, whereas in Q2 you really start to run out of options. You’re seeing a lot more plant closing announcements across the industry over the past few weeks.”

Adjusted free cash flow for the full year is forecast to be US$500 million to US$1.5 billion, below the earlier projection for US$3.5 billion to US$4.5 billion.

The automaker made the most of a sellers’ market in the first three months, reporting earnings before interest and taxes of US$4.8 billion -- more than the US$1.8 billion analysts predicted. Demand for the redesigned F-150 pickup and the new Bronco Sport SUV, led to adjusted earnings of 89 cents a share, compared with the 20-cent average of analysts’ estimates.

That resulted in “the most favorable supply/demand imbalance in a generation” and higher sticker prices, Adam Jonas, an analyst with Morgan Stanley, wrote in a note to investors last week.

Revenue amounted to US$36.2 billion in the quarter, above the US$31.25 billion analysts expected.

But as the chip shortage drags on and inventories dwindle, Ford is unlikely to fully capitalize on demand for its vehicles. CFO Lawler said the automaker had 44 days worth of supply of vehicles at the end of the quarter, well below the normal 60-day industry standard that is considered healthy.

North American operations continued to drive Ford’s results, with earnings of US$2.95 billion before interest and taxes, up from US$346 million a year earlier when the pandemic hit and profits plunged.

The company has struggled to turn around its overseas business. As evidence of progress, Farley said the company earned US$454 million outside of North America in the first quarter, compared with a cumulative US$5.8 billion loss in those markets over the past four years.

In South America, where Ford this year is ceasing production in Brazil after a century of carmaking, the company lost US$73 million compared with a US$113 million loss in the first three months of 2020.

--With assistance from David Welch.