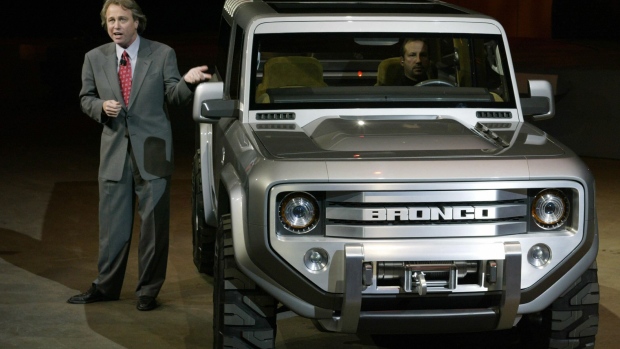 Ford Motor Co. is entering the fray for loyal off-road Jeep enthusiasts by reviving its historic Bronco brand, which has been dormant for a quarter century.

Originally assembled from Mustang and F-100 pickup parts, the Bronco was born in 1966 and went out of production in 1996, two years after O.J. Simpson made it infamous in a slow-speed chase on a Los Angeles freeway. Now, Ford is bringing it back as a three-model line with room to add additional versions.

Ford will introduce two-door and four-door variations of the mid-sized Bronco on July 13, along with a smaller Bronco Sport built on the mechanical underpinnings of its Escape crossover utility vehicle. All will come with standard four-wheel-drive and off-road capabilities the automaker will market as “Built Wild.” The goal is to take some of the rugged turf now claimed by Fiat Chrysler Automobiles NV’s popular Jeep line, especially the Wrangler.

“There’s not a lot of vehicles playing in this space. We’ve got the equity and the credibility,” Mark Grueber, Bronco’s consumer-marketing manager, told reporters in a briefing last week. “We just see it as an ideal time.”

In a twist on Jeep Jamboree four-wheeler weekends, Ford will offer Bronco buyers a day and a half of hands-on experience at what it calls “Off-Roadeo adventure playgrounds.” These are four permanent off-road courses in the U.S. where Bronco owners will learn to drive over rugged terrain in Ford-owned SUVs, so as not to harm their own vehicles, Grueber said.

Ford originally planned to show the Broncos on July 9, which is O.J. Simpson’s birthday. The former football player and broadcaster was accused, but acquitted, of murdering his ex-wife, Nicole Brown Simpson, and her friend, Ron Goldman. The company said it rescheduled to July 13 “to be sensitive and respectful.”