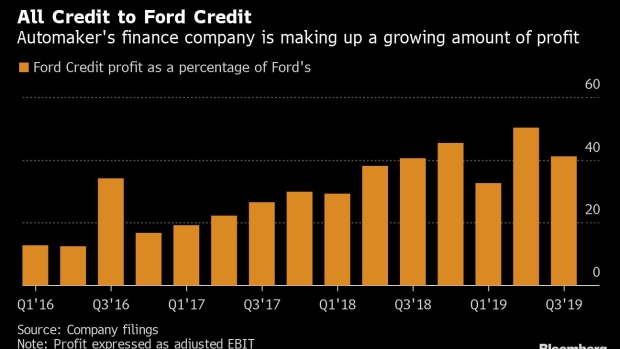 Thank goodness for the finance guys.

Ford Credit, the lending arm that’s become accustomed to propping up the company in good times and bad, now generates about half the automaker’s profit, up from 15% to 20% in the past.

Ford Credit is designed to perform a relatively simple task: make loans to the dealers stocking vehicles, then the consumers who buy them. Now, Ford is relying on its finance unit to help fund multibillion-dollar outlays on electric and self-driving cars while it simultaneously racks up $11 billion in charges from a restructuring that could take years.

“It’s like the ballast that keeps the ship steady,” said Lawrence Orlowski, an analyst at S&P Global Ratings. “It’s a balancing act.”

Ford’s been selling fewer and fewer U.S. vehicles for the last three years, and it’s losing billions overseas, including in China, where its annual vehicle deliveries fell by half during that time span. On Tuesday, analysts expect the company to report lower fourth-quarter automotive revenue and a 44% plunge in adjusted net income. Profit on that basis could be the lowest since 2009.

The second-largest U.S. automaker would be far worse off without its Ford Motor Credit Co. unit, which is effectively funding turnaround efforts by routinely borrowing in the debt markets and paying a dividend back to the parent company. The credit unit is expected to contribute almost $3 billion annually to Ford over the next two years, according to Benchmark Co. analyst Mike Ward. That’s up from just a $400 million contribution in 2017.

Ford Credit borrowed around $10 billion in the U.S. investment-grade bond market in the past year, apart from funds raised in other currencies and securitized debt. By contrast, it’s been more than three years since Ford Motor last issued bonds, according to data compiled by Bloomberg, as investors fretted about the company’s high debt load and slowing sales.

Credit graders are responding to Ford’s poor automotive performance, with Moody’s Investors Service the most aggressive so far. It downgraded Ford to junk in September, casting doubt on Chief Executive Officer Jim Hackett’s turnaround plan in the process.

S&P then cut Ford to the lowest investment-grade rating in October after the carmaker lowered its full-year profit forecast. Another downgrade by S&P would take Ford out of major high-grade indexes, which investors and analysts have contemplated for more than a year. If cut, Ford would be the largest U.S. nonfinancial high-yield issuer, which could add near-term pressure to its funding costs. It has about $35 billion of debt in the Bloomberg Barclays U.S. investment-grade index.

It’s not going to get any easier for the carmaker. Amid growing fears of an industry wide downturn, Ford is rolling out a critically important series of new sport utility vehicles and redesigning the F-150, its most profitable and best-selling model. Analysts are already flagging cost and execution risk tied to those introductions, especially after Ford botched the launch of its Explorer SUV last year.

“It’s quite clear Ford is not where it should be, but the finance arm is a bright spot,” said David Whiston, an equity strategist with Morningstar in Chicago who rates the automaker’s shares the equivalent of a buy. “Obviously you want the whole company operating at full power, which you don’t have right now.”

Ford Credit is contributing more and more to the parent’s earnings. In a normal operating environment, manufacturing cars and trucks should drive most of earnings, with credit only generating 15%-20% of profits, said Bloomberg Intelligence analyst Joel Levington. For much of last year, Ford Credit constituted somewhere around half the company’s profit.

Ford and its finance arm are inextricably linked. Each supports the other operationally and financially under a a relationship agreement that governs the connection between the two.

Ford Credit is also protecting the automaker’s prized dividend. The unit paid $2.4 billion back to its parent in the first nine months of 2019, covering the dividend cost for the entire year. That may be “unsustainable” in the long run, because Ford’s dividend consumes a much greater percentage of its cash flow than peers, according to BI’s Levington. Ford has repeatedly said it will not cut the dividend.

In a recession, Ford Credit’s role becomes even more important. It doesn’t play much in the subprime market, so the ratio of its losses to total customer bills outstanding stayed below 2% during the Great Recession, a low level. Its repossession rate never got higher than 3.2%.

Those strong metrics allowed Ford’s captive finance unit to generate a dividend for the parent even in 2009, when U.S. auto sales slumped to a 27-year low.

“With a healthy portfolio, a captive balance sheet in an economic downturn actually starts generating and kicking off a bunch of cash flow,” Tim Stone, Ford’s chief financial officer, said during a November interview at Bloomberg News headquarters in New York. “We take a very thoughtful approach to that business.”

Over the past two decades, Ford Credit has sent $28 billion up to Ford, according to company data.

“That’s not a bad thing -- that’s exactly the reason you want to have a healthy financial-services company,” said Hitin Anand, a senior analyst at CreditSights. “Ford Credit will come to the rescue of Ford Motor in more ways than one. It’s one of the best-run captive-finance companies in the entire universe.”

Finance companies can be a burden for manufacturers in downturns, as General Electric Co. discovered in the financial crisis. The conglomerate’s credit arm weighed on its share price as investors grew more concerned about complicated financial institutions. GE has been selling off and shrinking the unit’s assets for most of the last decade.

Ford Credit is a bright spot in Ford’s portfolio, and also among its peers. It prides itself on lending to consumers with higher credit scores, which keeps asset quality high and defaults low compared with rivals General Motors Financial Co. Inc. and Santander Consumer USA Holdings Inc.

In the third quarter, Ford Credit’s 60-day delinquency rate was just 0.14%. That’s low in an industry where 4.71% of auto loans were at least 90 days late, the highest in more than nine years, according to Federal Reserve data.

“As a credit analyst, I focus on glass half empty. Ford Credit is the positive part of the story,” said Olesya Zhovtanetska, senior director of public fixed income at SLC Management. “They need that cash cow.”

--With assistance from Olivia Raimonde.

To contact the reporters on this story: Molly Smith in New York at msmith604@bloomberg.net;Keith Naughton in Southfield, Michigan at knaughton3@bloomberg.net

To contact the editors responsible for this story: Craig Trudell at ctrudell1@bloomberg.net, ;Nikolaj Gammeltoft at ngammeltoft@bloomberg.net, Dan Wilchins