Ford Motor Co. is reinventing one of its marquee models -- the Mustang muscle car -- as a battery-powered crossover to become a player in the electric-vehicle market that is expected to take off in the coming decade.In a splashy ceremony Sunday ahead of the Los Angeles Auto Show, the carmaker unveiled the Mustang Mach-E, a swoopy hatchback with distinctive pony-car haunches and familiar shark nose that it claims has the power to take on Porsche. When it goes on sales next fall, Ford hopes to convince mainstream buyers its electrified Mustang is an alternative to the Tesla models dominating the EV market.

And Ford, which exited the battery-car business last year when it pulled the plug on its slow-selling Focus EV, is betting it’s cracked the code on turning a profit on plug-ins. By building the Mach-E in Mexico, where labor costs are low, and pricing it at US$45,000 and up, the automaker says it will avoid the losses automakers typically suffer selling high-cost EVs.“Every one of these that we sell, we’re going to make a lot more money,” Ted Cannis, Ford’s global head of electrification, said at a briefing on the Mach-E at Ford’s design studios in Dearborn, Michigan. “Every one that we make will make positive margin, both in Europe and the U.S., which is much better than we did with the Escape hybrid 10 years ago.”Still, it’s a high-risk gambit. The Mustang is Ford’s signature sports car, having sold more than 10 million units since it debuted in 1964 with simultaneous cover stories in Time and Newsweek. When Ford decided to abandon the traditional passenger-car business last year, it spared only one model: The Mustang.

For more than half a century, the Mustang has embodied high-octane power and unbridled strength. And Ford will continue to make gasoline-fueled versions of the classic muscle car.

The Mach-E is not only the first electric version of the Mustang, it’s also the first time it has been configured into a sport utility vehicle. That will test the elasticity of a brand built on low-slung speedsters.“Calling this a true sports car would be stretching it,” said Jeff Schuster, senior vice president of forecasting for researcher LMC Automotive. “The market obviously has gone in the direction of the SUV body type, that’s what’s selling. But the Mustang is not an SUV. It’s been a sports car.”Ford, having struggled to sell more mundane electric cars, is embarking on a strategy to electrify its icons, starting with the Mustang and following quickly thereafter with a plug-in version of its top-selling F-150 pickup. It is part of US$11.5 billion the automaker is investing to roll out 40 electric and hybrid vehicles by 2022. The idea is to show that Ford’s EVs can be fast and tough and are not just “compliance cars” intended to meet more stringent environmental regulations around the world.“We changed our whole strategy two years ago,” Cannis said. “We said, ‘Let’s play to our strengths -- performance vehicles, pickups, vans, SUVs, the things Ford knows how to do.’”

Regulations to curb emissions will drive demand for electric vehicles over the next decade, especially in China, the world’s largest auto market. In the U.S., where President Donald Trump has eased fuel economy rules, EV growth will be slower, but still strong. Sales of battery-powered vehicles will quadruple by 2025 to 809,537 models, accounting for 4.8 per cent of the U.S. auto market, up from 1.3 per cent now, according to LMC Automotive. 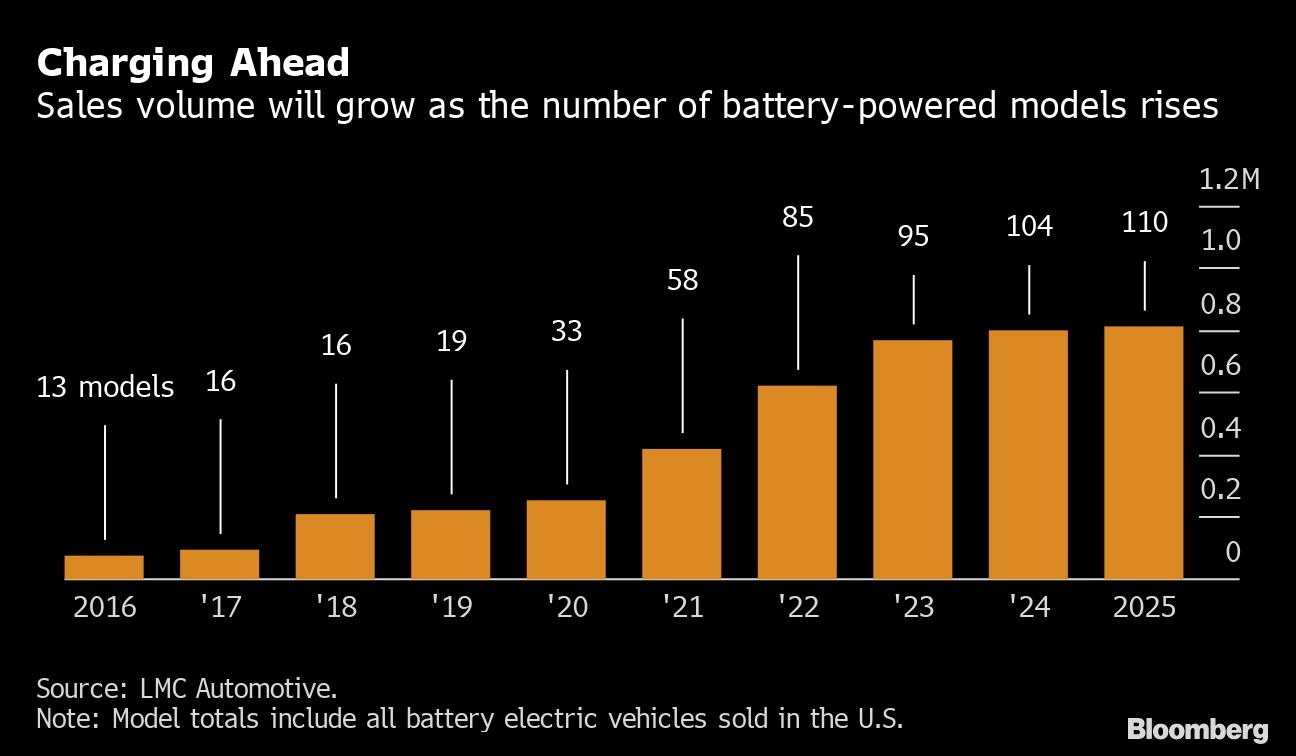 New electric offerings will mushroom to 110 choices in the U.S. by the middle of next decade, from just 19 now, LMC predicts. Standing out in such a crowded field will be difficult, especially for Ford, which ranked fifth behind Toyota, Tesla, Honda and Nissan among consumers surveyed recently by CarGurus on which brand of electric vehicle they would consider buying.That’s a key reason Ford decided to affix the Mustang pony to the front of the Mach-E, which originally was conceived in 2017 as merely inspired by the sports car. But as Ford executives were shown design concepts by the small team working on the project, they kept asking for more Mustang influence. By early last year, the decision was made to call it a Mustang.

“This had massive implications,” said Jason Castriota, brand director of battery-electric vehicles for Ford. “You can only imagine the amount of tension and strife this brought through the company.”That pressure was most acute on the engineers, who had to come up with a way to translate fossil-fuel fury into clean-running power from lithium-ion batteries.“When we realized we weren’t really doing a Mustang-inspired thing, we were doing a Mustang, the pressure ratcheted up,” said Ron Heiser, the Mach-E’s chief engineer. “We’ve got a lot of people in this company that are staking their engineering reputations that we’re delivering a Mustang.”

Electric motors have some inherent advantages, such as immediate thrust. Heiser’s engineers placed them between the wheels fore and aft, which, combined with batteries configured like a skateboard beneath the car, create an even weight distribution. That allows the car to ride low and hug the road like a Mustang.Heiser says the base all-wheel-drive Mach-E can beat a Porsche Macan SUV from zero to 60 miles per hour, and he claims the 450-horsepower GT version comes “very, very close” to a Porsche 911 GTS. For those who miss the roar of a big V8, he says the Mach-E will have tunable technology to create an “authentic” sound.

‘Back in the Game’

The focus on performance should make the Mach-E “a more compelling alternative” to Tesla’s similarly priced Model 3 sedan, Dan Levy, a Credit Suisse analyst, wrote in a Nov. 14 report. “The ultimate proof point of its success will be if it can truly take battery electric vehicle share from the Model 3 -- far from guaranteed.”Ford won’t say how many Mach-Es it expects to sell annually, but it will be the only model built at the 4.3 million square foot factory in Cuautitlan, Mexico, that most recently was cranking out more than 100,000 Fiesta subcompacts a year.LMC Automotive predicts the Mustang Mach-E will top out around 50,000 sales annually by 2021.“This is the first step in getting back in the game for Ford, after being viewed as behind in this space,” Schuster said. “They need to have a solid launch with no quality issues and, from a driving standpoint, it has to live up to the name.”