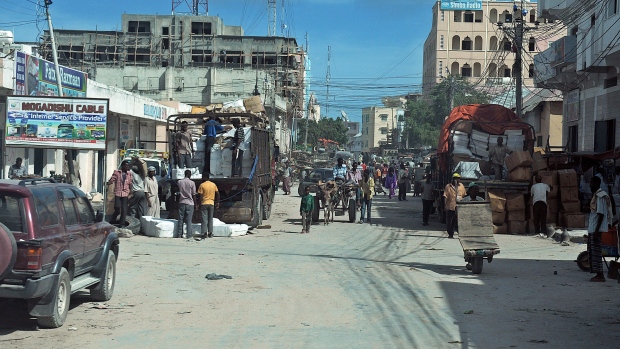 Twenty-two years after the ouster of dictator Mohamed Siad Barre, the capital is one of the few places stable enough to do business in Somalia, where bombings and suicide attacks remain a daily threat. , Mohamed Sheikh Nor

(Bloomberg) -- Somalia granted banking licenses to foreign lenders for the first time, part of an effort to open up its financial industry and rebuild the war-wracked nation.

Ziraat Katilim of Turkey and Banque Misr SAE of Egypt “will be the country’s first foreign banks to open branches in Somalia,” central bank governor Abdirahman Abdullahi said by phone following the board’s decision to approve the licenses.

Somalia is trying to revive an economy that’s been devastated by two decades of civil war and an insurgency by al Shabaab, a group of al Qaeda-linked militants who continue to stage attacks in the capital, Mogadishu, and further afield. US President Joe Biden in May sent Special Operations troops back to Somalia to revive a counter-terrorism mission that was halted during Donald Trump’s administration.

The decision to issue the foreign banking permits comes as Somalia undergoes a program to move it toward the so-called completion point of the heavily indebted poor countries debt-relief process. The move could help open the way for the government to conclude other funding deals with multilateral financial institutions.

Somalia has licensed 13 banks, without the two newly approved, according to the central bank’s website. Some offer a service known as Hawala, a money transfer system practiced in regions including the Middle East and Horn of Africa, where international and local remittances are made, largely based on trust.

The newly licensed entities are “solid banks that will add value to the development of Somalia’s financial sector and contribute to the growth of our economy,” the central bank said in a statement.