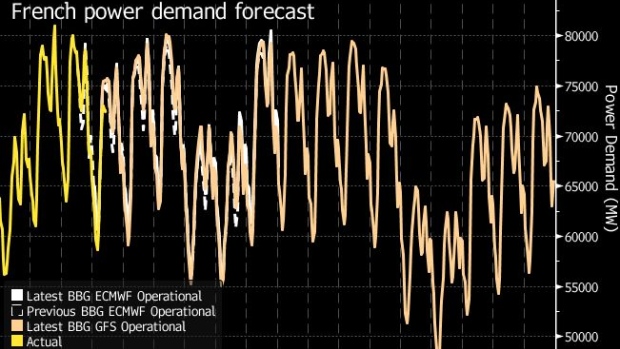 French power prices for next week are at near record levels as a drop in temperatures is expected to boost demand to the highest level yet this winter.

Prices rose as high as 484 euros a megawatt-hour after trading at a record 526 euros yesterday in the over-the-counter market. Demand is set to jump to 83.6 gigawatts on Wednesday Dec. 8, according to grid data. It’s not just next week -- the crunch is set to extend into next year with the first quarter contract is trading at 311.50 euros, data show.

Temperatures on the continent are expected to drop to well-below normal levels, according to forecasters. Power demand in France is very sensitive to temperatures, particularly in the winter months, due to the widespread use of electric heating. In winter, demand increases by 2,400 MW with each degree Celsius drop in temperatures, according to grid operator RTE.

“It is very cold from Wednesday until about Friday next week, which have the really high price risk,” said Bengt Longva, senior analyst at Nena AS. “You may have a situation where you need to reduce consumption significantly in France. It’s also dependent, of course, on nuclear availability.”

French nuclear availability is at 72% and output is lower than usual at this time of year, according to RTE data. That’s because coronavirus restrictions delayed maintenance that would otherwise have been completed before the start of winter.

At full capacity, the French nuclear fleet can deliver 55 gigawatts of power, according to Enappsys Ltd. That supply is what allows France to be one of the biggest exporters of electricity in Europe. When it’s cold, France needs to import power and when the interconnectors get to full capacity, the gap must be filled with local capacity that has not run for a while.

This includes some very inefficient and carbon intensive gas and coal capacity, which at current carbon price levels will be “massively expensive” to run, according to Jean-Paul Harreman, analyst at Enappsys.

The French week-ahead contract had softened to 380 Euros by 12:29 a.m. Paris time with the equivalent German price at 287 euros a megawatt-hour.

The development of La Nina is likely to bring cool temperatures to Europe this winter, according to Maxar Technologies LLC.