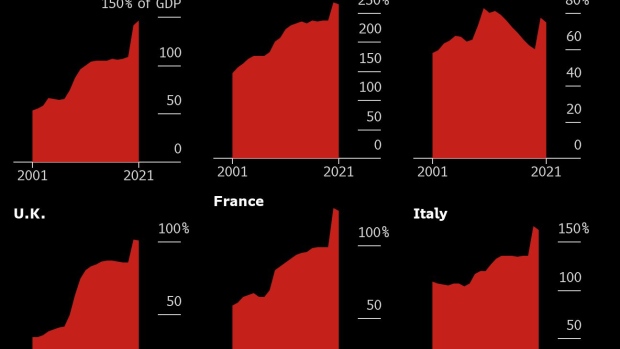 (Bloomberg) -- French Finance Minister Bruno Le Maire proposed splitting off the debt piled up as a result of emergency spending to tackle the coronavirus and spreading out repayments over years.

In a speech on Monday, he said the extra debt from the Covid crisis would be separated from the pre-existing public debt that stood at close to 100% of economic output at the start of the year. The debt strategy would be similar to CADES, a vehicle France created in the 1990s to repay social security debt.

Like many countries, France has had to stretch its budget to get the economy through the pandemic and the enforced restrictions on activity in recent months. Its debt ratio is forecast to top 121% of GDP this year after it increased spending on health care and pumped money into programs to protect jobs and businesses.

Le Maire said the state would put an another 500 million euros ($560 million) in an emergency fund to help the smallest companies and the self-employed.

Given the scale of the economic hit, and with the recovery likely to be slow, many governments have indicated they won’t rush to implement dramatic fiscal policies such as spending cuts in the near term to reduce debt.

In the U.K., Chancellor of the Exchequer Rishi Sunak has been asked by members of the ruling Conservative Party to take his time to pay off debt, because moving too aggressively could choke off growth.