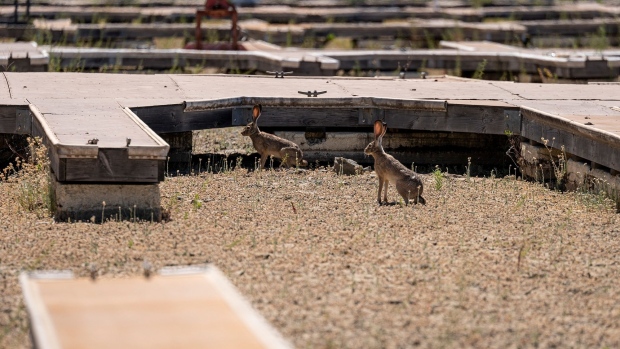 Jackrabbits on a dried lake bed at Folsom Lake Marina during a drought in El Dorado Hills, California on May 25. , Bloomberg

(Bloomberg) -- Swarms of hungry grasshoppers are leaving little food behind for grazing cattle, shellfish are baking in coastal waters, baby birds are falling from trees and dormant anthrax is reawakening to threaten sheep.

Such calamities are the result of a record heat wave and bone-dry conditions that gripped western North America in the past month, threatening animals and undermining the livelihood of farmers. What’s happening in parts of the U.S. and Canada shows the damage climate change is wreaking on agriculture.

In Montana and Manitoba, hot and dry conditions have become such a boon for grasshoppers that they’re devouring pastures and some cereal crops.

“The damage is going to get worse,” according to Kevin Wanner, associate professor of entomology at Montana State University, who said two straight years of dry weather swelled Montana’s grasshopper population to its biggest in about a decade. “They can appear suddenly one day and chew down a field.”

Rancher Gilles Stockton said he won’t have enough grass to get his 500 cattle at his ranch north of Billings through the winter, prompting him to search for feed alternatives before deciding if he needs to cull the herd in the coming months.

“Nobody is going to have any hay surplus for us,” said Stockton, who’s also president of the Montana Cattlemen’s Association. “If we can get through this year with a bunch of pain, what happens next year?”

In the Canadian province of Manitoba, where heat has stunted plants and caused two communities to declare agricultural disasters, the grasshopper population is on track to be the biggest since 2003.

“They’re chewing the grass right down to the point where it looks like it’s been sprayed by Roundup,” Manitoba cereal and cattle farmer James Jasper said, referring to the herbicide. “All that’s left are the weeds.”

His pasture 275 kilometers (171 miles) west of Winnipeg has been diminished so much by the heat, dryness and grasshoppers that he will likely have to put his livestock on costly feed a month early.

Feed prices are soaring as extreme weather curbs crop growth amid surging global demand, making it harder for some farmers to feed their animals.

Saskatchewan cattle producers may have to reduce their herds by as much as 40% by winter after years of well-below average precipitation “pushed livestock to the brink,” Saskatchewan Stock Growers Association President Kelcy Elford said. “Pastures are parched, hay and forage is scarce and feed costs are at record highs.”

That province has also seen some sheep die after exposure to anthrax, a deadly bacteria whose spores are found naturally in soil and can lie dormant for decades until dry conditions bring them to the surface where animals graze.

California dairy farmers face the added challenge of keeping cows cool and nourished during hot, dry weather while many farms are already wrestling with a lower birth rate and reduced milk production due to smoke inhalation from last year’s wildfires, said Jed Asmus, a dairy nutritionist for January Innovation Inc.

“In most cases, if you pull things out of a diet you are going to lower production,” Asmus said. “Couple heat with that, it gets very hard to maintain production.”

Fish and fowl are also being hurt by the heat.

Dozens of baby hawks in Washington and Oregon tried escaping the sun by jumping from their nests early in the week, according to Blue Mountain Wildlife rehabilitation facility. When temperatures soared above 100 degrees Fahrenheit in northeast Oregon, one facility treated 118 birds for dehydration and injuries from falls.

The Washington Department of Fish and Wildlife is investigating reports of dying marine life, largely around Puget Sound near Seattle where the heat wave coincided with extremely low tides, spokesman Ben Anderson said. The full impacts likely won’t be known until September, he said.

In nearby waters of Canada’s west coast, the stench of dead shellfish after the heat wave showed how widespread the impacts are.

“Shellfish including clams and mussels were essentially baked to death during the heat dome we suffered through at the end of June,” said Chris Harley, a marine biologist at the University of British Columbia. “Many otheranimals -- crabs, snails, sea stars, barnacles -- died as well. I’ve never seen anything this bad in 25 years of studying the coast in the Pacific Northwest.”

Inland fish in the Pacific Northwest were also affected.

While cruising in a speedboat on the Kalispel Tribe’s reservoir in Washington on July 12, hydrologist Eric Berntsen noticed several lifeless sucker fish bobbing in the water. It’s unclear if the deaths are from warmer water or heat-driven growth of aquatic weeds that suck up oxygen, he said. Regardless, the heat is to blame.

“We tend to see it every year when it gets hot,” he said.