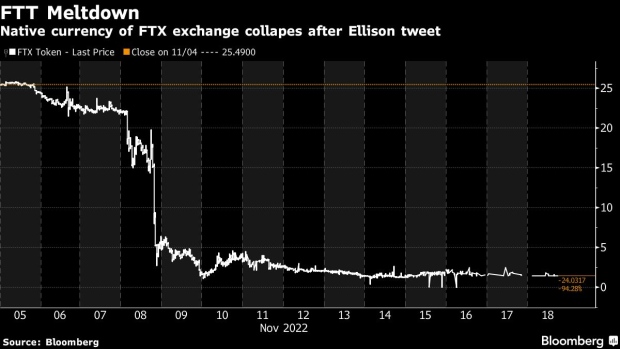 (Bloomberg) -- When did it go from grim to hopeless for Sam Bankman-Fried’s crypto empire? Many answers have been offered. One decidedly narrow one says it was the moment his second-in-command went on Twitter trying to prevent a plunge in the token FTT.

While the overall collapse was caused by much larger forces -- decisions that left Bankman-Fried’s businesses resting precariously on the coin, exposed to Binance chief Changpeng ‘CZ’ Zhao’s pledge to sell it -- zero hour came when Caroline Ellison offered to buy it all from CZ at a below-market price. That’s when market liquidity evaporated in an asset FTX had valued at around $5 billion a week earlier.

The analysis, compiled by risk-modeling firm Gauntlet, doesn’t purport to be a broad accounting of why FTX fell -- mismanagement, deceit and a reported decision to use exchange funds to support Alameda Research stand as much bigger sins. But for traders interested in an hourly accounting on when the point of no return was reached, the details point to Ellison’s tweet.

By calculating the ratio of total buy orders versus total sells in FTT’s main trading pairs on crypto exchanges including FTX, Bitfinex and Bitstamp, weighed by the difference to the spot price, Gauntlet’s data shows that the ratio dropped to below negative 200% right after Ellison tweeted at 11:03 a.m. Eastern time on Nov. 6. That means there were about four sell orders for each buy.

When order books on exchanges were balanced between sell and buy orders, the ratio is at zero. A negative 200% shows that the sell pressure for FTT skyrocketed and it kept for more than seven hours.

“Market conditions across a variety of centralized exchanges that traded FTT against USD or USDC materially degraded against FTT soon after Ellison’s tweets,” Tarun Chitra, founder and CEO of Gauntlet, said. “And this led to the sharp decline in FTT that likely led to a cascade of margin calls and or liquidations for Alameda based on their balance sheet.”

FTT is like many so-called native tokens used to draw transactions to exchanges by providing discounts to its holders. An added incentive was a so-called burn mechanism where FTX constantly bought the token to hypothetically boost demand by removing the acquired tokens on the blockchain permanently, according to a study by crypto research firm Messari.

The use of FTT didn’t appear to be problem until it was revealed that not only FTT was one of the main assets that made up FTX’s balance sheet, but also the token was used as collateral by Alameda Research accessing capital through both centralized and decentralized lenders.

In crypto, it’s not uncommon for trading firms to use tokens as collateral to receive loans from lenders, according to a Twitter thread by Cumberland, a major trading desk in crypto owned by Chicago-based DRW. Crypto entities in general face challenges getting access to traditional banking services. But unlike more popular collateral tokens like Ether, FTT is a relatively illiquid asset and had a fully diluted supply of about 352.2 million. A web page of FTX shows that 105 million of the total FTT tokens remain unsold.

Before Ellison’s tweet, the trading volume of FTT on centralized exchanges on Nov. 5 was at just $108 million, according to data from Coinmarketcap. On the same day, Ether’s trading volume was at $11 billion.

In decentralized finance, or DeFi, where everything can be monitored on blockchains, large traders sometimes profit from shorting the underlying collateral tokens of loans on decentralized lending projects. Because the the price to liquidate the loan position can be seen on chain, with enough capital, some traders can push the market to trigger liquidations, thereby profiting from the price drop of the tokens used as collateral.

A recent analysis by blockchain data firm Nansen shows that Alameda Research had been sending FTT tokens to Genesis Global, one of the biggest lenders in crypto, as early as September 2021. Genesis Global on Wednesday announced that it has temporarily suspended withdrawals at its lending division because of a liquidity crunch, after it disclosed its lending relationship with Alameda on Nov. 9. Prices for FTT dropped by more than 70%. It traded at nearly $2.50, based on TradingView data, the same day when FTX temporarily paused withdrawals.

While the opaqueness of centralized lending business makes it hard to know the price to liquidate Alameda’s loans, Ellison’s tweet triggered such a hunt.

“You don’t tell someone a price level like $22 unless you have a lot of confidence that you need that price, especially in such a public manner,” Chitra said.