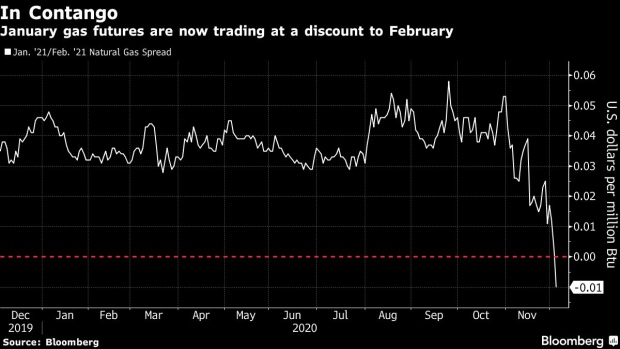 (Bloomberg) -- A closely watched U.S. natural gas price spread flipped to negative on Thursday, signaling that traders are already close to giving up on the prospect of a cold winter.

Gas for January delivery is now trading below February prices, a first for the 2021 contracts. January futures tumbled more than 7% on Thursday, the worst performance among major commodities, as near-term forecasts for chillier conditions were scaled back. Temperatures may be above normal in much of the Midwest and parts of the Northeast in mid-December, according to The Weather Company.

The market has failed to stay above $3 as investors unwind bullish bets following unseasonable warmth. Though gas exports have climbed to an all-time high and drillers have reined in production, there have been few signs of the weather cooperating to support a rally. Hedge funds’ bullish wagers on gas have dropped from a six-year high reached in late October.

“Natural gas, a heating fuel, switching to contango before winter even gets started is a very negative price indicator,” Bob Yawger, director of the futures division at Mizuho Securities, wrote in a note to clients.

The March-April gas spread narrowed to a record low for the 2021 contracts, suggesting traders are betting on abundant supplies by the end of the heating season. The spread, known as the “widowmaker” because of its volatility, has shrunk by more than 40% in December alone.