Microsoft conducted probe into Bill Gates' relationship with an employee

For almost three decades, Michael Larson has quietly shuffled around one of the world’s biggest fortunes with a chief priority: Keep his fabulously wealthy bosses out of the headlines.

The conservative bets, the nondescript office, the investment firm’s generic-sounding name; they were all carefully designed to shield Bill Gates and Melinda French Gates from criticism and produce steady, if seemingly unimpressive, returns.

The couple’s divorce announcement last month cracked the curated image. Unflattering details spilled out, including a report that Larson had allegedly harassed and bullied some employees.

On Monday, a spokesman said that Bill and Melinda Gates Investments -- the 100-person strong team led by Larson that’s overseen their personal fortune and the endowment of their namesake foundation -- changed its name to Cascade Asset Management Co. The moniker closely resembles Cascade Investment, which historically has been the part of BMGI that manages the Gateses’ personal wealth.

The rebranding is the latest step in the unfolding story of what will happen to one of the world’s largest fortunes when Gates and French Gates finalize their divorce. Larson was hired by the Microsoft Corp. billionaire in the mid-1990s to oversee that wealth.

The sprawling portfolio under his purview, estimated by Bloomberg News to be valued at about US$170 billion, has over the years generated returns that beat the broader stock market by about a percentage point, according to financial filings and people familiar with the matter.

The record illustrates the priorities of the uppermost strata of the ultrarich, where investment horizons span generations and riskier bets often don’t outweigh the value of a good reputation. Part of Larson’s job was to help Bill Gates uphold his image as a wonky billionaire devoted to fixing the world’s challenges, rather than make bold moves that could draw scrutiny.

“The price some of these guys are willing to pay to stay out of the news is high,” said Tayyab Mohamed, co-founder of family office recruiting firm Agreus Group.

The divorce and recent revelations about Cascade’s workplace culture, reported by the New York Times, raise questions about what’s next for Larson and the fortune he oversees. A spokesman for Cascade said BMGI is changing its name “to allow for the evolving needs of the Gates family and their philanthropic work” and that the group’s investment strategy and organizational structure won’t change.

French Gates, whose name was added to BMGI in 2014, has been in focus after Cascade transferred equity stakes worth more than US$3 billion to her, leading some in the industry to speculate she’s in the process of claiming an even larger control of her share of the riches. Their combined wealth stands at more than US$140 billion, according to the Bloomberg Billionaires Index. 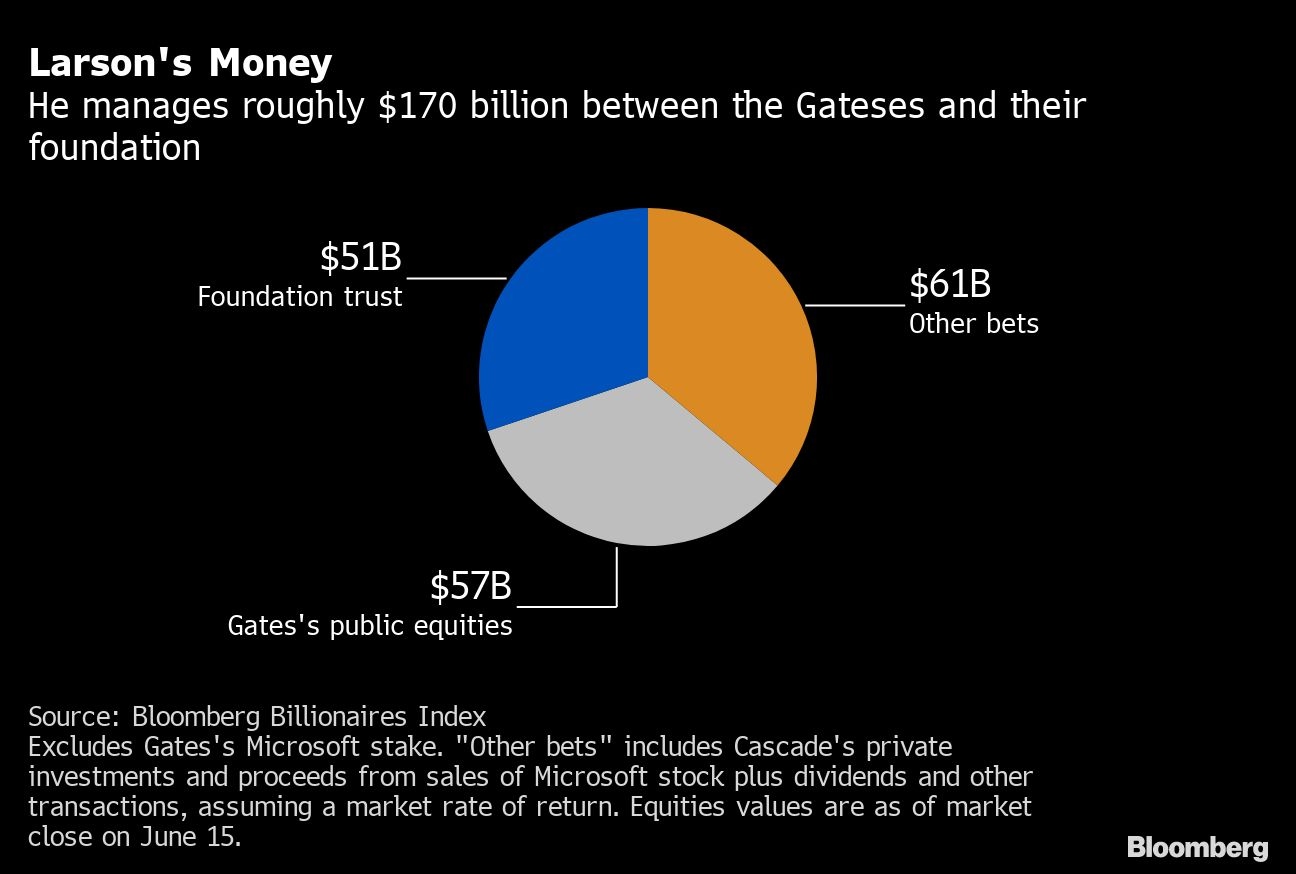 Larson, 61, has admitted that he sometimes used harsh language in response to the Times reporting, but denied that he mistreated staff. A Cascade representative has said the matters were examined and didn’t warrant his dismissal. A representative for Gates didn’t respond to a request for comment.

Mohamed said it’s of little surprise that Larson has remained in his role after the allegations, given his decades-long tenure with Gates and the loyalty it has likely engendered.

“Had Larson not had the professional impact he had, it would be a simple yes, he should resign,” said Mohamed, whose company helps family offices fill leadership positions.

Larson, often clad in a pink shirt, shies from the limelight and rarely attends conferences for family office professionals. A former bond-fund manager, he won Gates’s loyalty by delivering consistent returns and instilling in employees the notion that their primary focus was to protect their benefactor’s good name, according to people familiar with Cascade, who asked not to be named speaking about the company’s inner workings.

The manager had broad leeway from Gates on investment decisions, they both have said. French Gates rarely attended meetings in Cascade’s early days aside from the annual in-person gathering, and when she did she tended to be a passive participant, according to one of the people familiar with the firm.

She was unaware of most of the allegations involving Larson “given her lack of ownership of and control over BMGI,” her spokeswoman, Courtney Wade, said in a statement.

It’s unclear where French Gates is keeping her money, including the more than US$3 billion that has been transferred from Cascade, and whether she’s now setting up a family office of her own. She also runs Pivotal Ventures, an investment and incubation firm founded in 2015 that focuses on gender and racial equality and employs roughly 90 people.

Being the investment chief for one of the world’s biggest family fortunes might seem like an enviable job for an investor mulling creative bets. There’s hardly a worry about fundraising, client withdrawals or onerous regulations. But it often instead involves simply keeping wealth steady.

Aside from detracting attention from the Gateses, Larson’s main mandate has been to invest conservatively -- try to maximize returns but don’t lose money, one of the people said.

That reflects the typical investment approaches of big family offices and foundations, said Raphael Amit, professor of management at the University of Pennsylvania’s Wharton School.

“The No. 1 objective is preservation of capital,” he said, adding that’s why family office portfolios are so diverse, including not just public equities, but also fixed income, commodities and assets such as art.

In a Fortune story from two decades ago, Larson explained that much of his strategy boiled down to countering the swings of Microsoft stock. At the time, the portfolios both for the foundation and for the Gateses’ personal money mostly consisted of bonds, with some bets on private equity, commodities, Florida real estate and British hotels.

Cascade also owns around 270,000 acres of land, enough to make it the single biggest owner of U.S. farmland, according to the Land Report. The firm also has been involved in currency and commodities trading, venture capital and the development of a property complex in downtown Tampa.

The foundation’s most recent tax returns also shows US$804 million of corporate bonds and US$5.8 billion of other investments like mortgage-backed securities, bank loans and sovereign debt.

Cascade doesn’t disclose its overall investment performance, but financial reports from the foundation offer clues. The foundation’s assets under management have returned an average of about 8.6 per cent per year since 2001, according to a person familiar with the matter, beating the S&P 500 Index’s average annual 7.5 per cent gain over the past two decades. That track record is broadly representative of Cascade’s overall returns, another person said.

Cascade’s assets have periodically been boosted by proceeds from the sales of Gates’s Microsoft stock. And Warren Buffett, the billionaire founder of Berkshire Hathaway Inc., has periodically given shares in the conglomerate worth billions of dollars to the foundation. Buffett is one of the Gates Foundation’s three board members alongside Gates and French Gates, but has no involvement in investment decisions of the endowment, according to the foundation.

One remarkable feature of the portfolio is how little it changes. Of the 15 stocks listed in the foundation trust’s most recent filing, which discloses positions traded on U.S. exchanges, 10 of them were in the portfolio a decade ago.

The holdings haven’t uniformly jived with the Gateses’ charitable endeavors or priorities, which include global health and, more recently, climate change.

Cascade held investments in oil and gas companies until 2019. It was long the biggest owner of Signature Aviation Plc, the world’s largest operator of private-jet bases, before joining a consortium that took the company private this year. And it’s the biggest shareholder of Republic Services Inc., which for years has feuded with the International Brotherhood of Teamsters union, whose members are employees.

Gates has occasionally made it clear that Larson has broad discretion to make investment decisions. In a March “Ask me anything” event on Reddit, a user asked about his purchases of farmland. His response: “My investment group chose to do this.”

“When people find out that Cascade has made an investment in something, that’s not Bill Gates,” he said in the Fortune interview. “I wish everyone understood that.”