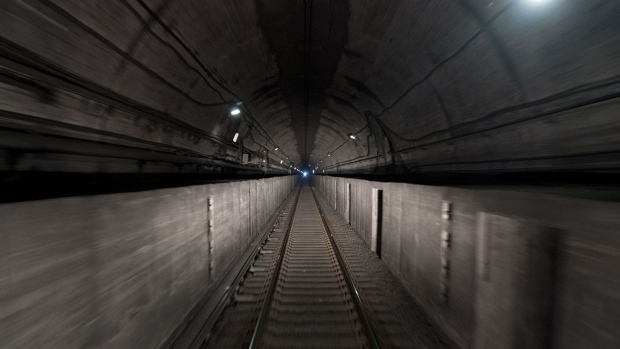 (Bloomberg) -- Everything seems aligned for the Gateway project, a commuter-rail tunnel connecting New York and New Jersey that would be an economic lifeline for the region.

The construction permits are in place. President Joseph Biden, who rode Amtrak for years, took office after Donald Trump’s administration halted progress. The U.S. transportation secretary calls it a priority and his deputy used to be New York City’s top transportation official.

But dirt won’t fly for perhaps 21 months as the project awaits federal aid from the infrastructure law that directs $550 billion to roads, bridges and mass transit. For advocates, businesses and long-suffering commuters, the wait is excruciating.

“Now’s the time to get it done, frankly,” said Brian Fritsch, manager of advocacy campaigns for the Regional Plan Association, a nonprofit that promotes economic and public works projects in the New York area. “Especially coming out of the pandemic, I don’t think there’s ever been a better time to do this project, which has been something people have been talking about for decades.”

Along with resolving the passenger-train bottleneck going into Manhattan and cutting down on commuting time, the Gateway project will spur $19 billion in economic activity and an estimated 72,000 jobs, officials have said. But the tortuous path of the project illustrates the hurdles that infrastructure developments face in the U.S. to obtain state and federal funding. Impact statements, environmental reviews, public hearings and financing commitments can take months to finalize, and often years.

“Projects take a long time because of the numerous steps that are required from concept to completion,” said Dennis Truax, president of the American Society of Civil Engineers and professor of civil and environmental engineering at Mississippi State University. “Part of that process is making sure that we are designing things in a way that is respectful of the resources used.”

The $12.3 billion plan to tunnel under the Hudson River on Wednesday received the final regulatory approval to begin construction, a key milestone for the project, which will also rehabilitate the existing, eroding link. It still needs a $5.6 billion federal grant to help finance the development. Amtrak will provide $1.4 billion while New York, New Jersey and the bistate Port Authority pay a combined $6.1 billion.

But the Federal Transit Administration must review the plan and assign a priority rating that would unleash the grant money. It’s an expensive wait. Officials estimate costs increase by about $1 million each day, because of inflation, according to Stephen Sigmund, a spokesman for the Gateway project.

“We’re grateful for the enormous support the project has, through good times and bad, from the Biden administration, our congressional champions, our governors and local representatives,” Gateway Development Commission co-chairs Steven Cohen, Balpreet Grewal-Virk and Anthony Coscia said in an email. “It’s a project whose time has come, and the sooner we get full construction started, the better off we’ll be in delivering a project that this region and nation can be proud of for the next century.”

The existing tunnel — 110 years old and eroded by seawater — is a major part of Amtrak’s Northeast Corridor line, carrying more than 2,200 daily trains between Washington and Boston. The decaying structures are a major chokepoint, with disabled trains regularly clogging the tubes and causing major delays, and failing signals bringing traffic to an infuriating halt. Digging a new one isn’t likely to begin until August 2023, officials say. It will take that long to get federal money flowing.

The Hudson tunnels have a particularly fraught history. Major improvements to the commuter-rail system between New Jersey and New York have been studied since the 1990s. An earlier project, Access to the Region’s Core, was fully funded and would have doubled peak commuter service to Manhattan. Work began in 2009 and was scheduled to be complete by 2018. Former Republican Governor Chris Christie canceled it in 2010, citing objections to the project’s cost and design. Then-U.S. Senator Frank Lautenberg, who died in 2013, called the cancellation “one of the biggest public policy blunders in New Jersey history.”

New Jersey Transit president and chief executive officer Kevin Corbett, said in an email Wednesday that improvements are important not just to his state, but one of the nation’s most productive regions.

“It’s impossible to overstate the importance of this stretch of transportation infrastructure,” he said. “The Hudson Tunnel Project will improve reliability, capacity and resiliency for generations to come in one of the country’s most densely populated and congested areas.”