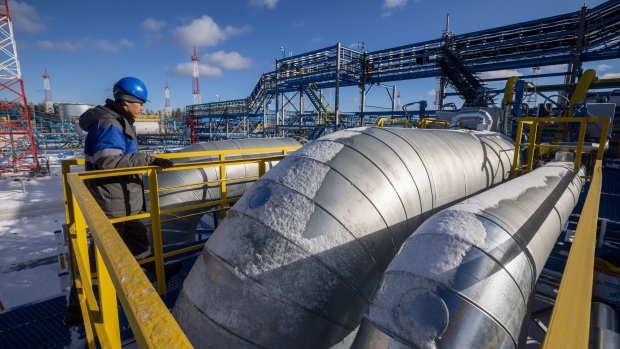 (Bloomberg) -- Gazprom PJSC’s daily natural-gas flows to key markets fell in November for the third month in a row as Moscow continued to limit deliveries to Europe.

Pipeline gas flows from Russia to Europe have been shrinking for months as the Kremlin hits back at sanctions following its invasion of Ukraine. Supply concern intensified last week when a payment spat between Gazprom and Moldova threatened to reduce flows via Ukraine -- the last remaining route still bringing Russian fuel to western Europe -- though the dispute was resolved.

Gazprom exported 133 million cubic meters a day to countries outside the former Soviet Union last month, down 3.9% from October, according to Bloomberg calculations based on data published Thursday. Since the start of 2022, the company’s supplies to its main foreign clients have slumped 45% from a year earlier to 95.2 billion cubic meters.

Gazprom doesn’t provide a detailed breakdown of exports to European markets, which include Turkey. Currently, deliveries continue via Ukraine -- albeit at reduced levels -- while one leg of the TurkStream pipeline is sending fuel via Turkey to Hungary and Serbia.

Last month, shipments via Ukraine averaged 42.4 million cubic meters a day, while flows via Turkey averaged some 27 million a day. That makes Gazprom’s total exports to Europe just a fifth of what they were before the invasion of Ukraine.

By contrast, flows to China via the Power of Siberia link continue to increase, with deliveries “regularly” exceeding daily contracted volumes, Gazprom said. The producer supplies gas to the Asian nation from east Siberian fields, which aren’t yet linked up to its Europe-bound pipelines.