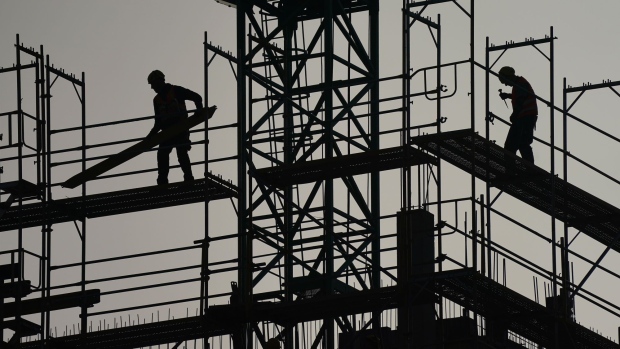 BERLIN, GERMANY - FEBRUARY 23: Workers stand on scaffolding on a residential building under construction in the city center on February 23, 2021 in Berlin, Germany. German government ministers as well as Chancellor Angela Merkel spoke today on Germany's housing situation. Housing prices have risen substantially in most larger cities across Germany in recent years and the federal government has sought to counter the rise with a "housing offensive" of expanded construction. (Photo by Sean Gallup/Getty Images) , Photographer: Sean Gallup/Getty Images Europe

(Bloomberg) -- The builder of Europe’s tallest tower is in talks to acquire a majority stake in a 636 million-euro ($752 million) Turkish hospital venture, in a deal that could ease an effort to restructure loans used to fund the project, according to people with knowledge of the matter.

A unit of Ronesans Holding AS is looking to buy stakes of 24.5% each from Webuild SpA and Turkish builder Kayi Insaat, members of a consortium that won a contract to build and operate the hospital project in southern Gaziantep province, said the people, who asked not to be named because the matter is confidential.

If the deal is successful, Ronesans Saglik Yatirim would also inject equity needed to complete construction, they said. The sides are still negotiating the size of the transaction and trying to finalize it this year, the people said.

Already among the largest contracting companies in Europe, Ronesans -- Turkish for “renaissance” -- has been increasing its footprint in health care as it also expanded into real estate development, energy and petrochemicals. In 2018, it completed a skyscraper in Russian President Vladimir Putin’s hometown of St. Petersburg, building a 462-meter high-rise that houses the headquarters of gas giant Gazprom PJSC.

Ronesans, whose other projects include a presidential palace in Ankara, recently struck a deal with Danish facility services company ISS A/S to jointly operate five other hospitals completed under a public-private-partnership model in Turkey.

Turkey has suffered construction delays at some of the nearly two dozen hospital projects started since 2015, developed at a total cost of $10 billion and partly funded by the public. The government extended guarantees for the loans and provided medical staff, while private companies pledged to supply non-medical equipment and services over the course of 25-year contracts.

Putting further strain on businesses, the Turkish currency’s depreciation of about 12% against the dollar in 2021 has made foreign debt more expensive in lira terms, forcing many companies to restructure credit.

The hospital in Gaziantep will have 1,875 beds and is expected to be completed this year, according to the Health Ministry. The consortium behind the venture, in which Samsung C&T Corp. was the biggest shareholder with a 26.5% stake, signed an 18-year loan deal in 2016 with lenders including Export-Import Bank of Korea and the European Bank for Reconstruction and Development among others, according to data compiled by Bloomberg.

The group started an effort to restructure 483.5 million euros in loans, people familiar with the plan said in January, choosing consultants to first help resolve governance issues among the partners in the hospital, and then to manage talks with creditors.

Ronesans Saglik Yatirim’s equity contribution would bridge a funding shortfall in the project because cash committed by some of the existing investors isn’t in place, said two of the people. For the restructuring to go ahead, other members of the consortium would have to honor their pledges to finish the hospital’s construction, they said.

The goal of a possible restructuring would be only to extend the maturity of the existing loans, while avoiding new borrowings. The consortium also consists of Gaziantep PPP Fund managed by Istanbul-based Actus Asset Management, which has 24.5%. Actus declined to comment.