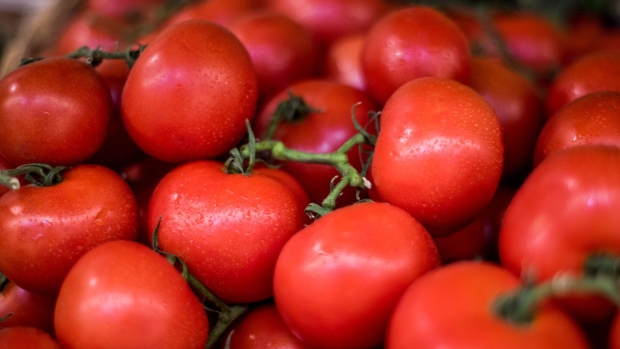 Tomatoes sit on display at the FICO Eataly World Agri-Food Park in Bologna, Italy, on Thursday, Nov. 9, 2017. Eataly, a supermarket and restaurant chain, may be in the pipeline for a 2018 initial public offering. , Bloomberg

(Bloomberg) -- Scientists tweaked the genome of a tomato plant to allow it to produce vitamin D in the hope of helping solve a deficiency that affects an estimated 1 billion people worldwide.

The tomato was engineered using the Crispr gene-editing technology so that vitamin accumulates in the fruit’s peel and flesh, a group of international researchers said in a study published in the journal Nature Plants.

The vitamin, which the human body can make when skin is exposed to the sun, prevents disorders affecting bone strength and deficiency has been linked to cancer, Parkinson’s disease and dementia. Low levels were even linked to more severe cases in patients hospitalized with Covid-19.

Scientists are looking for ways to boost intake of the vitamin to solve the global deficiency at a time when more people embrace plant-based diets, which are better for the environment but often don’t supply enough of the nutrient.

The study “provides a leap forward in decreasing our dependence on animal-based foods,” Dominique Van Der Straeten and Simon Strobbe, researchers at the Laboratory of Functional Plant Biology at Ghent University in Belgium, wrote in an accompanying article in Nature Plants.

Plants are usually considered a poor source of the vitamin, which is found more readily in salmon, tuna or fish liver oils. Manufacturers in the US started fortifying dairy products in the 1930s, a practice that’s been extended to cereals, plant-based milk alternatives and even orange juice, to supplement intake.

Because the scientists used gene editing, they didn’t introduce DNA from another species. Instead, they enhanced a desirable trait in the plant by snipping out a small fragment of a gene, using Crispr “like a pair of molecular tweezers,” Jie Li, one of the authors and a researcher at the John Innes Centre at Norwich Research Park, England, said during a press conference.

Two tomatoes would fill the gap between the recommended daily intake of vitamin D and the average consumption in the UK, according to Li.

The scientists said the approach might be applied to eggplants, potatoes, and peppers. They also believe the level of vitamin could be increased further through sun-drying and that the leaves, which were found to contain an extremely high levels of the nutrient, could be used to make supplements or fortify other foods, providing more avenues for income to farmers.