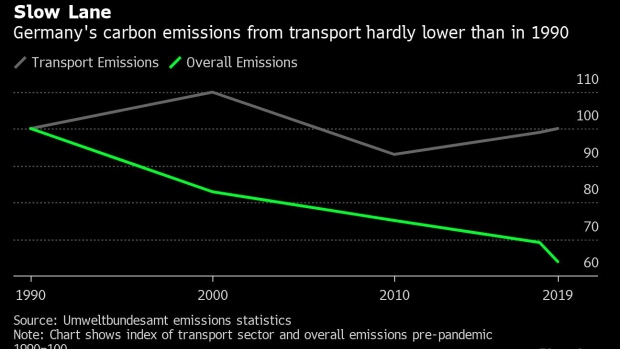 An electric charging plug sits connected to a BMW automobile inside a Bayerische Motoren Werke AG showroom in Frankfurt, Germany, on Tuesday, Aug. 4, 2020. The German automaker said it is seeking to reduce CO2 output per car by at least a third by 2030, and track progress via raw material sourcing, production and road emissions. Photographer: Peter Juelich/Bloomberg , Bloomberg

(Bloomberg) -- Germany is facing a ban of combustion-vehicle sales before the end of the decade -- that’s if the home of Volkswagen AG is serious about hitting the new government’s targets on battery-powered cars and climate protection.

The incoming coalition of pro-business Free Democrats, center-left Social Democrats and environmental Greens plans to have at least 15 million fully electric vehicles on Germany’s roads by the end of the decade. Reaching such a goal, also vital to meeting Germany’s international commitments on slashing greenhouse gases, would require ending sales of combustion-engine cars in just a few years.

“It can only be achieved if new cars with internal combustion engines are no longer registered before 2030,” said Volker Quaschning, professor of renewable energy systems at the University of Applied Sciences in Berlin. “It makes sense to stop the registration of gasoline and diesel cars by around 2028.”

So far, only 570,000 pure EVs drive on Germany’s roads, accounting for just over 1% of the nation’s fleet. Following a generous boost to incentives that can total 9,000 euros ($10,092) in vehicle-price reductions, registrations have more than doubled in the year through October.

The new target, up from a previous one for 10 million EVs, will get a leg up from an accelerated rollout of 1 million public chargers and an extension to incentives.

Wednesday’s coalition agreement, forged after two months of negotiations, is a sign of the divide Germany’s three-way coalition needs to cross. While the FDP’s Christian Lindner, set to become Finance Minister in the new administration, has spoken out against bans on combustion engines, phasing out fossil-fuel cars and highway speed limits have been mainstay demands of the Greens.

To get anywhere near the coalition’s target, new electric vehicle sales would need to grow at a rate of 33% per year until 2030 -- a tall order considering they’re set to remain pricier than combustion-engine alternatives well into the second half of this decade. A commitment on EVs already proved a hurdle for outgoing Chancellor Angela Merkel, who fell short of a 1 million vehicle goal by 2020.

“There isn’t much substance in the coalition agreement when it comes to reaching such high levels of EV sales in practice,” said Giulio Mattioli, a researcher in the department of transport planning at the TU Dortmund University. “Consumers will take some convincing.”