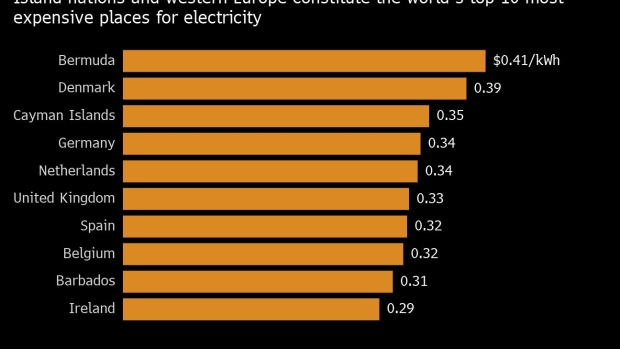 Christian Lindner, Germany's finance minister, during a news conference at the Federal Ministry of Finance building in Berlin, Germany, on Wednesday, Aug. 10, 2022. Lindner set out 10 billion-euros ($10.2 billion) of tax adjustments to ease the burden on people suffering from high inflation. , Bloomberg

(Bloomberg) -- German Finance Minister Christian Lindner promised that temporary “price brakes” on electricity and gas will be implemented quickly to help the government fight what he called its “energy war” with Russia.

Lindner declined to provide details of how the measures would work or how they would be financed, saying they’re still under discussion in Chancellor Olaf Scholz’s ruling coalition. He said only that they would ease the burden across Europe’s biggest economy, including for households, companies, cultural institutions, sports clubs and hospitals.

“I will inform you how this will be implemented in concrete terms once the government has reached an agreement,” Lindner, who is also the chairman of the pro-business Free Democrats, said at a news conference Monday in Berlin.

The goal of bringing down gas prices will require steps including an expansion of energy generation via nuclear and coal, releasing some gas from storage, and measures at the European level such as joint gas purchases, he added. He also signaled that Germany would press ahead with its own plans if agreement isn’t reached swiftly on joint European Union action.

Germany and its EU partners are pushing ahead with emergency plans to dampen energy costs after Russia’s squeezing of gas supplies to the continent sent prices soaring.

The government in Berlin is struggling to contain the energy crisis as prices six times higher than usual wreak havoc on businesses, households and the economy. Last week, the state announced it needed to bail out gas giant Uniper SE to secure vital supplies without a clear plan for how it will fund the rescue. Higher energy prices are also stoking inflation, with an acceleration above 10% expected this week.

EU energy ministers will seek a political agreement on further measures to address high prices when they meet in Brussels on Friday to discuss proposals put forward by the European Commission, the bloc’s executive arm.

They would build on a previously proposed intervention package that includes a windfall levy, a price cap on lower-cost electricity and a mandatory power demand reduction target. While some member states are calling for a ceiling on the price of gas, the Commission is unlikely to seek a broad cap, EU diplomats told Bloomberg last week.

The energy crisis will also be a key topic during an informal meeting of EU leaders in Prague on Oct. 7, and a quarterly summit scheduled for Oct. 20-21 in Brussels.

According to an economy ministry paper, Germany is “emphatically committed to a quick agreement at EU level” on lowering prices but would act unilaterally should this not happen fast enough.

Under German proposals, households and small and medium-sized enterprises should be guaranteed a lower electricity price per kilowatt-hour up to a yet to determined threshold.

For anything beyond this “basic consumption,” they would have to pay the regular market price. Electricity distributors who have to pass the discounts on to consumers would then get their costs reimbursed from the profits from a windfall tax.

Lindner said the financing of the gas-price brake is part of the current discussions in the ruling coalition. He referred to a loan program created by state-owned development bank KfW after the outbreak of the coronavirus pandemic -- which still has around 67 billion euros available.

He rejected the idea of setting up a special fund outside the regular federal budget -- like the recently created 100 billion-euro vehicle for military spending -- and reiterated his commitment to restoring a constitutional limit on net borrowing next year.