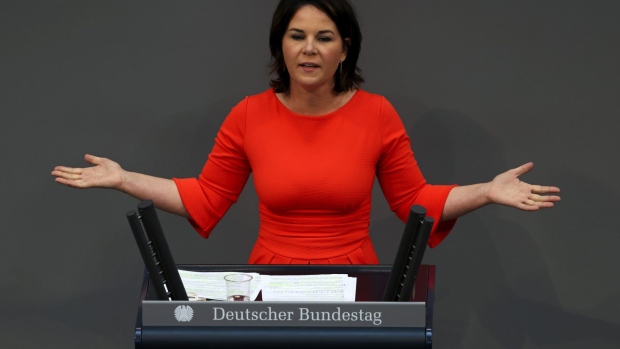 Annalena Baerbock, co-leader of the Green Party, gestures while speaking in the Bundestag in Berlin, Germany, on Thursday, June 24, 2021. Chancellor Angela Merkel's speech today could very well be her last in the Bundestag. , Bloomberg

(Bloomberg) -- Germany’s Green party won’t be able to participate in September’s federal election in the state of Saarland in the latest blow to chancellor candidate Annalena Baerbock.

The party will be blocked from the local ballot due to irregularities in the election of the regional candidates, Germany’s federal election officer said Thursday.

This adds to the list of Baerbock’s setbacks, which include claims of plagiarism, mistakes in her resume and not reporting a 25,000-euro ($29,700) payment.

The outcome of the election, after which Chancellor Angela Merkel will step down, continues to look uncertain. While Merkel’s conservative bloc has maintained its lead ahead of the Sept. 26 vote, its advantage over the second-placed Greens has narrowed to as little as two percentage points in one poll amid criticism of CDU/CSU front-runner Armin Laschet’s response to the flooding.

According to the latest Kantar survey for Focus magazine published Wednesday, support for the CDU/CSU dropped three points compared with the previous week to 24%. The Greens gained three points to 22%, ahead of the SPD in third at 18%.

The exclusion from the ballot in the state of Saarland comes after internal wrangling over the Greens lead candidate in the region, who was selected by excluding 49 party votes, which the federal election commission said should have been included in the process.

The state of Saarland at the French border makes up about 1.3% of the electorate.