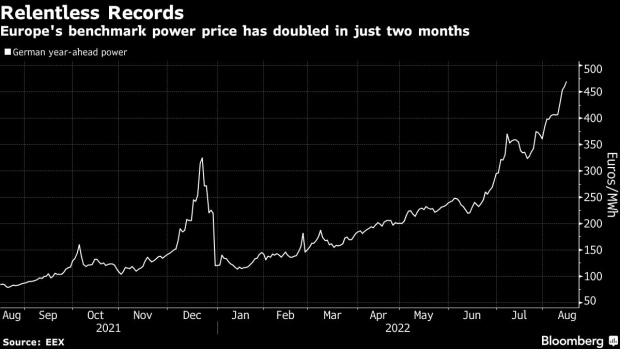 TROISDORF, GERMANY - AUGUST 02: Technicians maintenance work on High-voltage electricity power lines on August 02, 2022 in Troisdorf, Germany. The German government, in a bid to raise its reserves of natural gas ahead of the coming winter, is turning to coal among alternatives for electricity production. Germany produces approximately 15% of its electricity with natural gas and is seeking to reduce its consumption due to ongoing tensions with Russia, from which it still imports large quantities of gas. Russia has reduced gas flows to Germany as a consequence of Germany's support for Ukraine against Russia's ongoing military invasion. (Photo by Andreas Rentz/Getty Images) , Photographer: Andreas Rentz/Getty Images Europe

Next-year electricity rates in Germany advanced as much as 3.7% to 477.50 euros ($487) a megawatt-hour on the European Energy Exchange AG. That’s almost six times as much as this time last year, with the price doubling in the past two months alone.

The market is being driven by concerns over whether Europe’s tight gas supplies will be able to generate enough electricity this winter. France’s nuclear capacity is extremely low, denting the possibility of power exports in the months ahead.

Day-ahead prices in Germany and the UK also set records Monday, an indicator of high demand for cooling, with heat waves and drought on the continent straining infrastructure in the short term.

Rising energy prices are feeding through to household bills and the cost of everything from making food to heating glass. Energy is driving inflation across Europe, pushing consumer-price increases into double-digit territory.

In the UK, the household energy price cap is set to almost double at the start of October on the back of rising wholesale costs. The wholesale price of UK electricity for that month has jumped about sevenfold in the past year to roughly £591 ($713) a megawatt-hour on the Intercontinental Exchange AG.

European governments are looking at measures on how to ease the pain and impact that soaring energy costs are having on economies. In France, the state plans to fully nationalize Electricite de France SA, the embattled nuclear power utility now struggling to keep its plants going in the blistering heat.

Benchmark Dutch gas futures for next month extended last week’s gain, climbing as much as 4.2% in Amsterdam. The price has more than doubled since June.