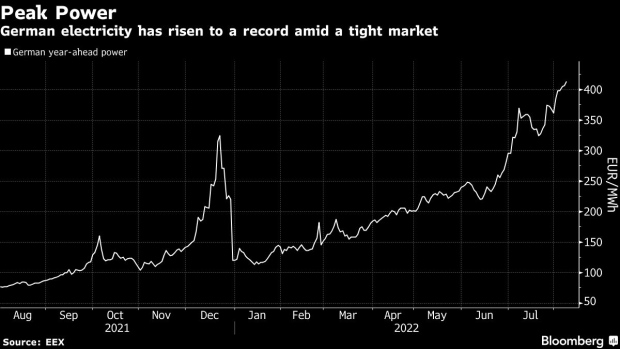 An air conditioning unit under the window of a residential apartment building in Barcelona, Spain, on Thursday, July 29, 2021. Scorching heat is boosting electricity prices across Europe, adding to a long list of factors that have sent power costs surging this summer. Photographer: Angel Garcia/Bloomberg , Bloomberg

While demand and prices typically drop off in the summer, this year a decline in Russian gas supplies during the key stockpiling season -- as well as reduced power output in France -- has underpinned a blistering rally.

French power for 2023 rose 1% to a record 543 euros ($554) a megawatt-hour on the European Energy Exchange AG on Monday. That’s more than five times the average seasonal price over the past five years. The equivalent German contract rose as much as 1.8% to 414 euros, before paring gains to trade little changed.

“The market remains elevated due to both the gas crisis and the dry, warm weather which causes reduced nuclear production in France,” analysts at Energi Danmark A/S wrote in a note.

The surge in prices in Europe is feeding into a cost-of-living crisis, prompting governments to offer support to homes and businesses. In some nations that has taken the form of short-term price caps, while others are looking at more permanent solutions such as limiting the effect of gas costs on power markets.

“Some countries in Europe are looking beyond the current supply challenges and soaring prices,” Arhnue Tan, an analyst at researcher BloombergNEF, wrote in a note. “These governments are searching for ways to prevent or counter future energy crises.”

Europe’s electricity system is under stress this summer as extreme heat raises demand and disrupts supplies. A long drought has sapped reservoirs and rivers that provide a vital source of low-carbon power in places such as Spain, Italy and Portugal. Nordic nations are also experiencing hot, dry weather that makes it hard to refill hydropower reserves that are already low for the time of year.

In France, the heat has threatened nuclear-reactor output, since environmental rules limit the discharge of water into the surrounding waterways when river temperatures rise. However, Electricite de France SA received a waiver to keep a number of its plants online as the nation struggles to produce enough power.

French electricity for next month fell as much as 1.8% to 520 euros a megawatt-hour.