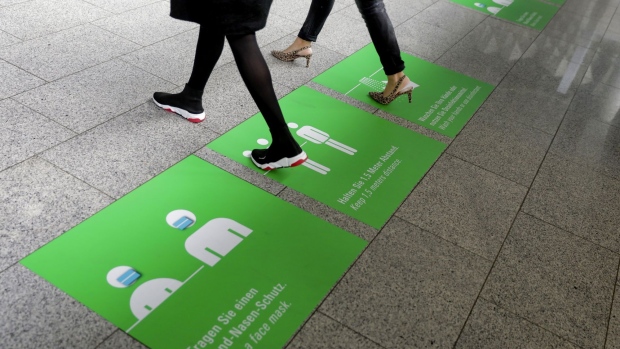 Travelers walk across social distancing and protective face mask information floor signs at Frankfurt Airport, operated by Fraport AG, in Frankfurt, Germany, on Tuesday, May 12, 2020. The Covid-19 crisis has brought global air travel almost to a halt, with governments closing borders and urging populations to stay at home to contain the pandemic. , Alex Kraus/Bloomberg

The German economy shrank 2.2 per cent in the first quarter, the most in more than a decade, offering an early flavor of the damage from the coronavirus outbreak.

A revision to the fourth quarter to show a 0.1 per cent contraction means Europe’s largest economy is already in a recession. With restrictions to contain the pandemic only slowly being lifted, the economy is set to suffer much more in the three months through June.

The German government has already mobilized some 1.2 trillion euros (US$1.3 trillion) to support German businesses, and is working on additional tools to kickstart the economy. More than 370,000 people lost their jobs in April alone, and a program where the state compensates large parts of wages lost when businesses cut workers’ hours has received applications for more than 10 million staff.

Finance Minister Olaf Scholz on Thursday promised a stimulus program in early June that will focus on investing in a “modern and climate friendly future.”

Even though the situation is dire, Germany isn’t faring as poorly as much of the rest of the euro area. France, Italy and Spain have all registered first-quarter contractions of around 5%. The Dutch economy shrank 1.7 per cent, according to a separate report.

That’s partly because German containment measures were comparatively light and only took effect on March 23, later than in other countries. There’s also the economy’s reliance on manufacturing and trade, sectors that have been weathering the crisis slightly better than the services and tourism industries that are dominant in Europe’s south.

Projections for Germany -- as well as the euro area -- are highly uncertain and largely depend on how the outbreak develops. The region’s largest economy is on track for its worst recession since World War II, with the European Commission predicting a decline in output of 6.5% this year. 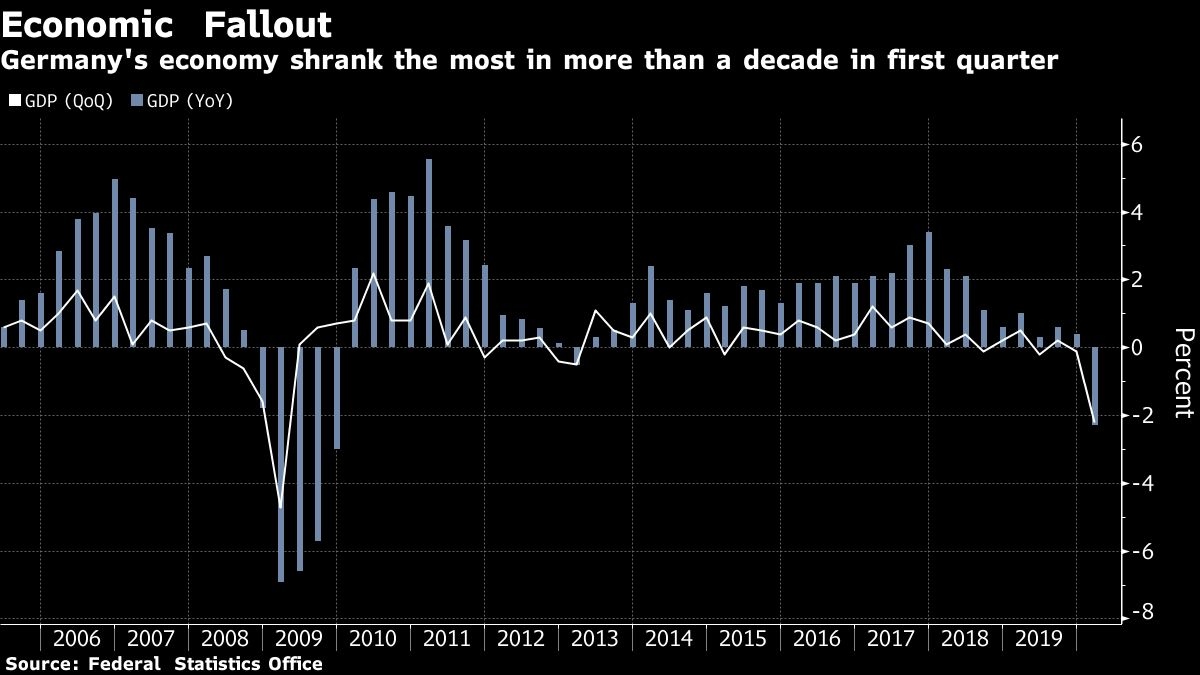 “Assuming restrictions are eased broadly as the government plans, and light-touch social distancing measures follow, output will be down 5.5 per cent this year.”

While the European Central Bank has offered some hope that the economy might have already seen the worst of the coronavirus slump, policy makers including the ECB’s vice president and the chief economist have cautioned that the speed and scope of the recovery will depend chiefly on confidence returning to consumers.

In China, industrial output increased in April for the first time since the virus outbreak, suggesting the economy is starting to recoup losses. Yet retail sales extended their decline.

In Germany, Volkswagen AG was forced to cut back production at its largest car factory this week after gradually restarting assembly lines last month, pointing to weak customer demand. Sportswear maker Puma SE forecasts the current quarter to be worse than the previous one, warning that the pandemic is crushing sales.

Restaurants and hotels probably won’t operate at full capacity as long as there’s no vaccine or treatment for the coronavirus, and supply-chain disruptions mean exporters will continue to struggle.

Hapag-Lloyd chief Rolf Habben Jansen said Friday he anticipates the pandemic will have “very significant impacts in 2020, beginning in the second quarter.” Still, the container shipping company maintained its 2020 earnings forecast, counting on a gradual recovery in the global economy in the second half.