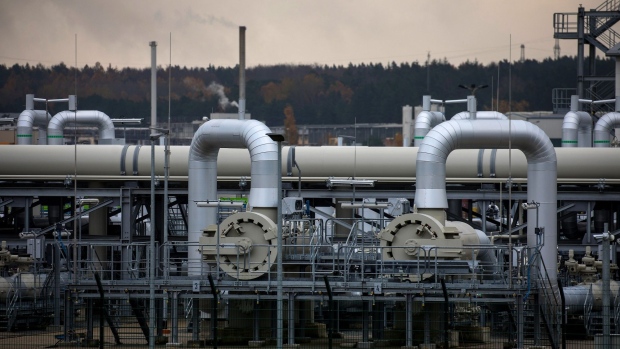 (Bloomberg) -- The German government has pushed for an exemption for the energy sector if there is a move to block Russian banks from clearing U.S. dollar transactions, according to documents seen by Bloomberg.

People familiar with recent discussions said other major western European nations hold similar views. One official said that conversations since the documents were circulated suggest the exemption is likely to be part of a final package of penalties agreed with the U.S. that would be deployed in the event that Moscow invaded Ukraine.

With President Vladimir Putin massing troops near the Ukraine border, the U.S. and its European allies are working to agree on economic retaliation. But Germany is concerned that, without an exemption, the supply of energy to Europe could be jeopardized, one of the documents says.

Such a sanctions “carve-out” would not prevent potential measures against the Nord Stream 2 pipeline that is due to bring extra Russian gas across the Baltic to Germany in the coming months, the official said. The Foreign Ministry declined to comment on the documents.

The papers have been shared with Berlin’s allies and come as the German government faces criticism from other nations for blocking the sale or shipment of defensive weapons to Ukraine. The Kremlin has repeatedly denied it intends to invade Ukraine, but is demanding security guarantees from NATO.

A European Union official said that options on the table include restricting Moscow’s ability to convert currency, to trade with the West and access key technologies. The challenge is that as allies work to piece together a weighty suite of measures, each country is trying to shield their own economy from potentially significant side effects.

Several other major European countries have also sought to insert carve-outs as part of the sanctions discussions and have pushed for transition periods before the full force of the measures would take effect, as well as protections for existing contracts, according to people familiar with discussions that have taken place in recent weeks.

“Sanctions have the best effect if they work efficiently,” German Foreign Minister Annalena Baerbock said last week, at a press conference alongside U.S. Secretary of State Antony Blinken. “We need to check carefully what has the most effect, and maybe not only what looks tough to the outside world.”

“It’s about sanctions which really have an effect, not against oneself, but rather against Russia if there is further escalation,” she added.

The government in Berlin has also raised reservations about the severe impact on German financial institutions and the European economy if the allies were to impose a comprehensive freeze on Russian assets and ban transactions with major Russian banks.

Any unwanted consequences beyond the targeted institutions is a red line for Germany, one of the papers adds. It cites the example of Iran where U.S. sanctions have meant that most European financial institutions have stopped nearly all Iran-related commercial activity.

“The same reasoning applies to the exclusion of major Russian banks from Swift,” the international payments system, the document says.

In the event of a “military aggression against a sovereign state and a severe breach of international law, endangering the European peace and security,” Germany is prepared to sign onto a package that could include: