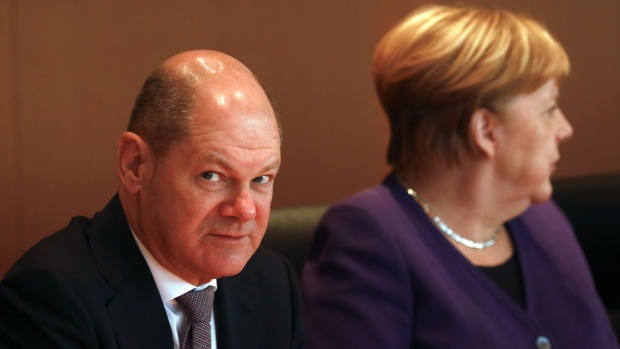 How do I talk to her about our debt? , Photographer: Michele Tantussi/Getty Images Europe

(Bloomberg Opinion) -- It’s not often these days that Germany’s Social Democrats have good economic ideas. But a forthcoming initiative by one of them makes eminent sense, and deserves more support than it’s likely to get. Olaf Scholz, the finance minister, wants to suspend the country’s so-called “debt brake,” a constitutional limit on public deficits and borrowing. But the SPD’s senior partners in the governing coalition, the Christian Democrats of Chancellor Angela Merkel, are already lining up to dismiss the proposal. They should think again.

Germany’s fiscal cap isn’t exactly unique. Switzerland and Austria have versions of it, too, while the European Union and most U.S. states have constraints on public budgets in some other form. But the Germans, as is their wont, have not only made their rules especially stringent but also abided by them rather obsessively.

The debt brake came into existence as a constitutional amendment in 2009, just as the global financial implosion was transmogrifying into the euro crisis. The two crises had many causes, but the Germans at the time fixated on one: debt. A moot but plausible reason may have been that the German word for debt (Schulden) happens to be etymologically related to that for guilt (Schuld). The brake has since taken effect in different forms and at different times for the federal, regional and municipal levels of government.

The result has been that they’ve all scrimped on public spending for the past decade, just when they should have been investing much, much more, for all sorts of good reasons. One is that German infrastructure, from roads to broadband, is overdue for an update. Another is that the sluggish euro-area economy, including Germany itself, badly needs fiscal stimulus because monetary policy has hit its limits.

Yet another good argument for higher public outlays is that, if targeted wisely, they can encourage more private investment too. This in turn could help to correct one of the world’s biggest economic imbalances: Germany’s current-account surplus, which is the world’s largest. By definition, such a surplus is the excess of domestic savings over investment. And its flip side is corresponding deficits in other countries, which are hurting more as a result.

Last but not least, there’s no good rationale against boosting public borrowing in order to fund such spending, because it would cost nothing. Indeed, yields on German government bonds are negative — the markets would actually pay, rather than charge, the state to raise more money.

A rule that may superficially look prudent is therefore instead a major problem for the European and even global economy, just when it’s at risk of stalling amid trade wars and a looming pandemic. None of these arguments, incidentally, could have escaped German policy makers. For years absolutely everyone — from the International Monetary Fund to the White House and the European Central Bank — has been berating the Germans on these very points. The European Commission just admonished them again, in its latest country report.

Given that context, what Scholz plans to propose in March is really only a tiny tweak to the rule. He wants Europe’s biggest economy to take its foot off the brake just one single time, so that the federal government can assume about 40 billion euros ($44 billion) in debt from some 2,500 struggling cities and counties. This would enable municipalities, especially those in economically depressed areas, to borrow and spend on local infrastructure, schools and more.But because the debt brake is in the constitution, Scholz needs to win two-thirds majorities in both houses of Germany’s parliament. And he won’t get them. All of the parties on Germany’s right, from the center to the fringe, are dead-set against anything that sounds to them as guilty as debt. The Christian Democrats even joke, tongue-in-cheek but proudly, that the debt brake is their “fetish.”

Nobody is suggesting that profligacy is good government policy. Nor, however, is obstinate stinginess and slavish obedience to arbitrary rules at a time when the world economy is teetering on the edge and only a few countries have the fiscal capacity to help out. Germany, as the only member of the Group of Seven that keeps running budget surpluses, is the biggest and most important of those countries. It’s time the Germans understood their own vital role in the world, and scrapped the well-meant but misguided rule that is causing so many problems.

To contact the author of this story: Andreas Kluth at akluth1@bloomberg.net

Andreas Kluth is a member of Bloomberg's editorial board. He was previously editor in chief of Handelsblatt Global and a writer for the Economist.