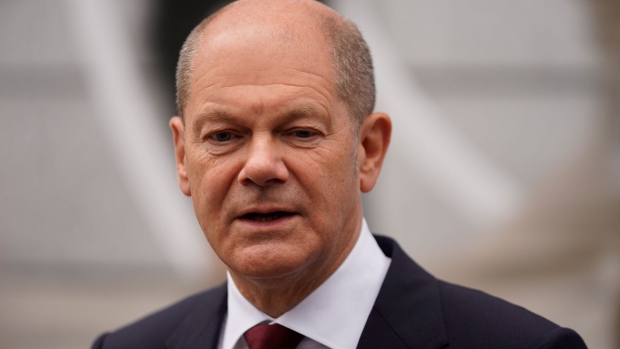 (Bloomberg) -- Olaf Scholz said he will review possible immunization mandates for people who work with vulnerable groups, as Germany’s incoming chancellor tries to show he can gain control of a brutal outbreak.

Scholz said his government, which is expected to be sworn in in early December, will do everything to fight the pandemic. He’s been criticized for being slow to react. Angela Merkel asked members of Scholz’s coalition to impose a two-week lockdown, but officials refused, according to a report by the Bild newspaper.

“Vaccination is the way out of this pandemic,” Scholz said Wednesday in Berlin during the presentation of his coalition agreement. “In facilities in which particularly vulnerable groups are cared for, we should make vaccination compulsory. An expansion of this regulation remains to be examined.”

Germany is in the midst of its worst outbreak of the pandemic, with infection rates more than double the peak in the spring and hospitals overloaded in hard-hit areas.

To address the pandemic, Scholz -- who spoke on the Covid outbreak before turning to the coalition’s plans -- intends to set up a permanent task force to coordinate federal and state policies. The group will start work before the new government is installed, he said.