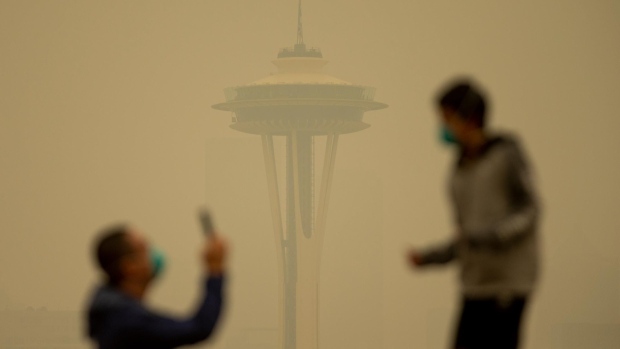 SEATTLE, WA - SEPTEMBER 12: People take photos against the backdrop of the Space Needle as smoke from wildfires fills the air at Kerry Park on September 12, 2020 in Seattle, Washington. According to the National Weather Service, the air quality in Seattle remained at "unhealthy" levels Saturday after a large smoke cloud from wildfires on the West Coast settled over the area. (Photo by Lindsey Wasson/Getty Images) , Photographer: Lindsey Wasson/Getty Images

(Bloomberg) -- Tuesday night’s game between the San Francisco Giants and the Mariners in Seattle has been postponed due to air quality. The games will be rescheduled in San Francisco for Wednesday and Thursday.

The move comes as Major League Baseball receives scrutiny for playing games with poor air conditions as the smoke from the Northwestern wildfires spread. NBC first reported on the game delay.