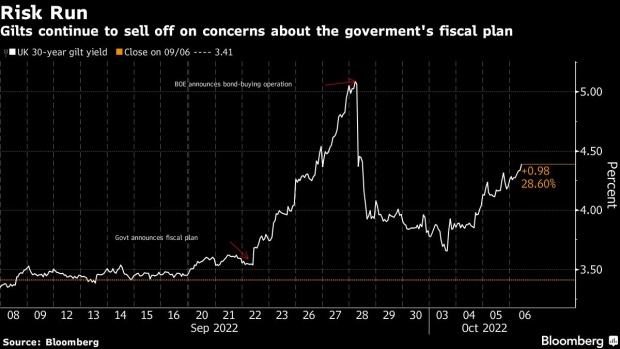 (Bloomberg) -- The pound fell and UK gilt yields surged amid concern over the government’s plans to loosen fiscal policy and as traders braced for an end of the central bank’s market backstop.

On Thursday, 10-year maturities led the fall in gilts, with the corresponding yield surging as much as 21 basis points to 4.24%.

That’s the highest since Sept. 28 -- when the Bank of England staged a dramatic intervention to stave off an imminent crash in the gilt market by pledging unlimited purchases of long-dated bonds. By doing so it prevented a full-blown crisis spurred by forced selling from pension funds, as concerns about Prime Minister Liz Truss’s unfunded tax-cut policy tore through markets.

With that backstop set to end on Oct. 14, traders are now facing up to the prospect of further turbulence.

“What’s happening is you are having the repricing higher of risk premia, and when this happens you get both yields higher and the exchange rate lower,” Vasileios Gkionakis, head of European FX strategy at Citigroup, told Bloomberg TV.

He added that a “big depreciation” in sterling was “unavoidable if these policies carry on.”

After rolling back plans to slash taxes on the country’s highest earners earlier in the week, Truss appears to be sticking to her plan to cut taxes and cap energy bills to stimulate economic growth. This is not sitting well with investors, and concerns over how that will be funded is weighing on the pound and gilts.

“The bond market is not comfortable at all by what’s been announced in the past week,” Societe Generale SA Strategist Kenneth Broux said. “There is a risk premium in holding UK assets and very little confidence in what the government is trying to do.”

(Updates levels in the second and fifth paragraphs. A previous version of the story corrected analyst attribution in final paragraph.)