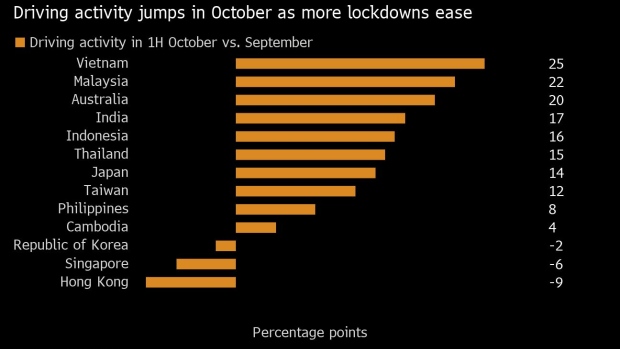 The U.S. gasoline crack is the highest it's been for this time of year since 201 Bloomberg , via Bloomberg

(Bloomberg) -- Fuel consumption is soaring around the globe, and with millions of barrels of daily refining capacity offline, refiners still in the game are reaping some of their fattest margins in years.

Globally, about 2.3 million barrels a day of refining capacity was shut during the pandemic and another 1 million barrels are likely to be shut in the next year, Facts Global Energy analyst Steve Sawyer said. That’s just as demand is returning to pre-pandemic levels. Fuel demand is soaring, with cars jamming roads again and gas-to-oil switching gaining speed ahead of winter.

As a result, refiners are enjoying hefty margins —  a welcome change after a challenging 2020. In the U.S., the Nymex gasoline crack, a rough gauge of the margin refiners can capture with a barrel of crude based on futures prices in New York, was trading above $16 a barrel on Thursday, the highest since 2017, seasonally. Margins are also rising in Asia and Europe, where shortages of coal and natural gas are boosting the demand outlook for diesel, kerosene and propane ahead of winter.

The rising margins signal that crude oil demand will remain strong as refiners continue to process more to meet consumption needs. That could mean that global oil stockpiles will continue to fall in the coming months. Gasoline balances worldwide are set to tighten significantly over November and December, according to Energy Aspects.

U.S. margins are also being supported by seasonal refinery maintenance and a flurry of weather-related outages, most recently the flooding that ensued after the San Francisco-area experienced torrential rain earlier this week. That flooding pushed retail gasoline prices in San Francisco to an all-time high of $4.75 per gallon on Thursday, according to GasBuddy.

In Europe refiners have been making better profits on gasoline, partly as demand in transport has exceeded pre-pandemic levels. Italy’s demand for gasoline in September was above 2019 levels while French consumption of gasoline is improving faster than diesel.

Rotterdam gasoline’s premium to Brent crude, or crack, has risen in October to the highest seasonally in data going back to 2018.

Asian refiners’ profits reached pre-pandemic levels as fuels processing powerhouse China slashed oil product exports in the midst of its own energy shortage, boosting transport fuel margins across the region ahead of a winter that could require more heating fuels.

Additionally, road fuels demand is rebounding with traffic roaring back from Vietnam to Malaysia and Australia over the first half of October as virus-led restrictions on mobility eased, according to figures compiled by Apple Inc. Refining margins in Singapore are the highest seasonally since 2018.

“China’s energy crunch is reducing exports of gasoline and diesel both into and out of the region just when nations are coming out of Covid lockdowns and demand for both are rebounding,” Sawyer said.

To be sure, the power crisis is curbing profits for refiners that rely heavily on diesel production because of the surging cost of natural gas.

Diesel margins in Europe are not as high seasonally. And most margin estimates don’t include energy and hydrogen costs, which are soaring as the region’s natural gas prices have spiked. Hydrogen is particularly important in units known as hydrocrackers, the big diesel-making machines that have traditionally been the profit centers for the region’s refineries.