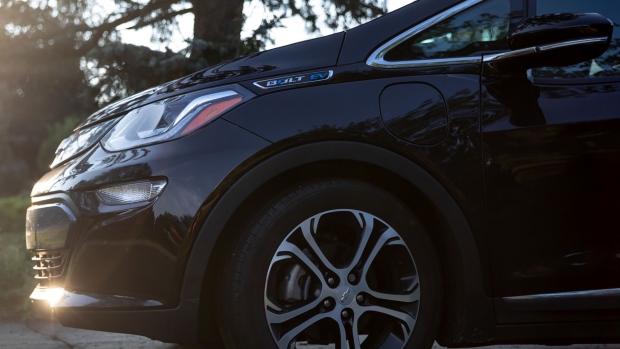 (Bloomberg) -- General Motors Co. and battery supplier LG of Korea have finally found a fix for fire risk in the battery of the Chevrolet Bolt electric car as the companies hope to end a year-long recall that has bedeviled the plug-in car for almost a year.

The two companies have improved their manufacturing process for lithium-ion batteries in the Bolt and larger Bolt EUV and have already started building the cells and packs at two plants in Michigan, GM said Monday. The Detroit automaker plans to start replacing the defective batteries in October.

If the solution works, GM and LG may be able to get beyond a dangerous and embarrassing recall that had Chevrolet dealing with impatient customers since July. While the two companies looked to find a solution, Bolt owners were told not to fully recharge or come close to depleting the batteries, and they had to park the cars outside and away from other vehicles.

“We’re grateful for the patience of owners and dealers as we work to advance solutions to this recall,” said Doug Parks, GM’s executive vice president for Global Product Development, Purchasing and Supply Chain, in a statement. “Resuming battery module production is a first step and we’ll continue to work aggressively with LG to obtain additional battery supply.”

LG may also add production so GM can replace more replacement battery modules and start producing the Bolt and Bolt EUV. GM idled the vehicle assembly plant in Orion Township, Michigan, in August when the automaker decided that the LG batteries weren’t safe.

GM also has a software diagnostic tool that will be installed in the next 60 days for Bolt owners. If Chevy has replaced the battery, owners can resume driving their cars at full charge. If they haven’t, but have had the diagnostic software installed, they can charge their cars to 80% battery capacity. The software will monitor battery performance and over time, owners will be able to fully charge those cars even if the modules have not been replaced.

Until the battery pack is fixed, GM still advises Bolt owners to charge the vehicle more frequently and avoid depleting battery below approximately 70 miles of remaining range; to continue to park vehicles outside immediately after charging; and to not leave vehicles charging indoors overnight.