Gold held onto gains and headed for its first weekly advance since early June as investors weighed renewed concerns over economic growth.

Bullion’s reversal comes with more economic data fueling fears of a recession. US business activity contracted in July for the first time in more than two years, according to data released Friday, adding to a slew of indicators earlier in the week that are painting a gloomy outlook. Meanwhile, a gauge of the greenback has retreated from its July 14 peak.

“We are finally starting to see some weakness in the US dollar index, as gold bounces off an oversold level, recovering above US$1,700 for now,” said John Feeney, business development manager at Sydney-based bullion dealer Guardian Gold Australia. “We now expect this initial flight to the US dollar to start rotating back into gold as investors search for a true and reliable hedge against inflation.” 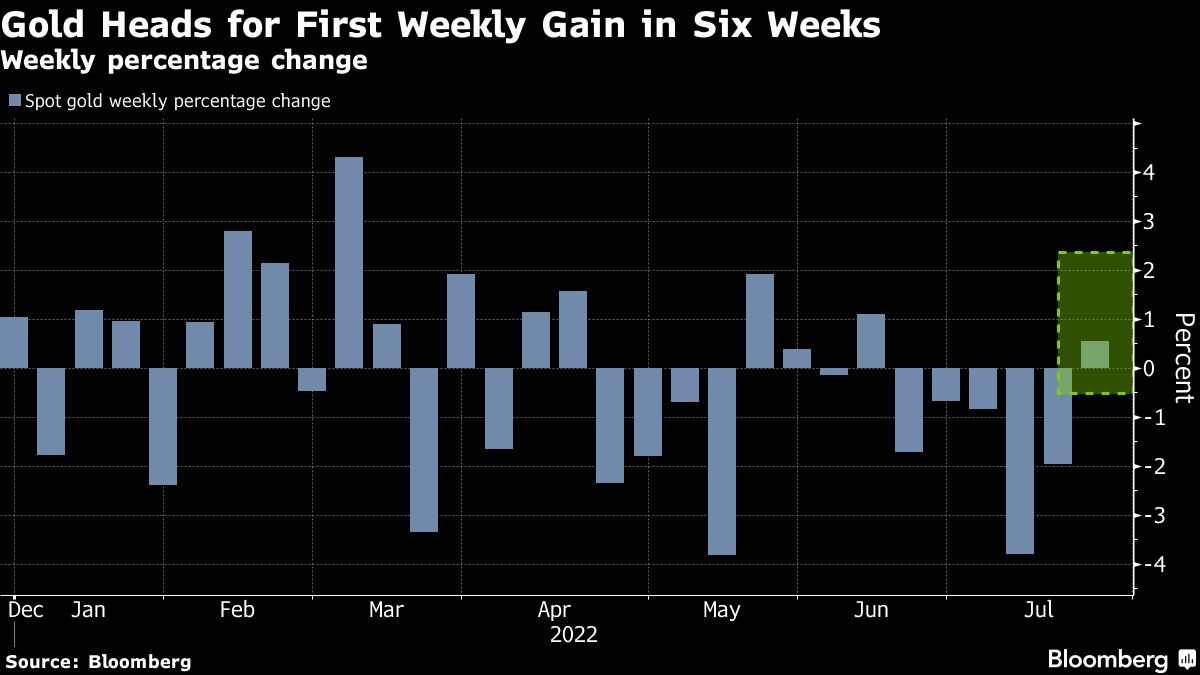 Also weighing on gold is ongoing selling by exchange-traded fund investors, Commerzbank AG analyst Carsten Fritsch said in a note. Investors have withdrawn more than 100 tons from gold ETFs during the past four weeks, Fritsch said.

Investors will closely watch the Federal Reserve’s meeting on July 26-27 for clues about its monetary policy path. On Thursday, the European Central Bank raised its key interest rate by 50 basis points, the first increase in 11 years, as it confronts surging inflation. Gold climbed above US$1,700 an ounce following this larger than expected rate hike.

“Even when the euro shed its gains again” Fritsch said, “gold remained at its higher level.”

Spot gold rose 0.1 per cent to US$1,721.11 an ounce at 2:29 p.m. in New York. Prices climbed 1.3 per cent in the prior session after earlier dropping to the lowest intraday level since March 2021. Gold futures rose 0.8 per cent to settle at US$1,745.30 on the Comex. The Bloomberg Dollar Spot Index fell 0.3 per cent. All other precious metals rallied except silver, which fell 1.1 per cent. Palladium lead gains at 7 per cent.

Palladium is becoming the go-to commodity trade after strong earnings from Tesla and as Chinese consumers resume car purchases. If dollar weakness continues, palladium will be one of the commodities that benefit during this global economic growth downturn, according to Ed Moya, senior market analyst at Oanda.

“Palladium will benefit as recession fears for the US should put a cap on the dollar rally and demand for cars should still remain strong across US and China,” he said. “I think some traders viewed today’s first half of China auto sales as very positive for palladium.”