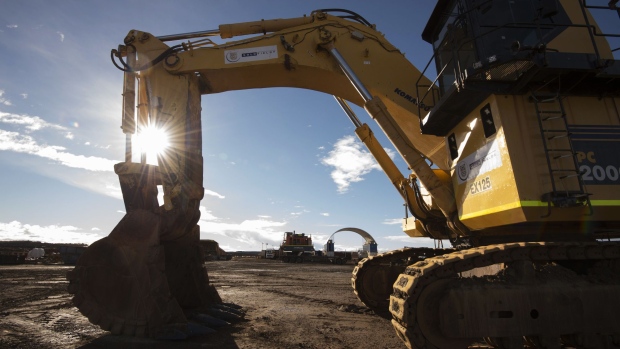 An excavator sits in a workshop area of the St Ives Gold Mine operated by Gold Fields Ltd. in Kambalda, Australia, on Wednesday, Aug. 9, 2017. Global gold deals have also slowed, declining to $19.8 billion in 2016 from $22.8 billion a year earlier, according to data complied by Bloomberg. , Bloomberg

(Bloomberg Opinion) -- Gold’s record run to almost $2,000 an ounce has burnished cash flows and driven a surge in shares of bullion producers. The rally provides a renewed test of discipline for Barrick Gold Corp. and peers after a similar climb a decade ago prompted a spate of inflated deals and overly optimistic investments that wasted billions.

The 2020 redux isn’t being fueled by traditional demand: The China Gold Association says consumption in the world’s biggest buyer plunged by more than a third in the first half. Instead, it’s a combination of low bond yields, pandemic worries and institutional investor appetite. Silver has also rallied, breaking through $24 an ounce this week to its highest since 2013. Precious metals aren’t always predictable, but Covid’s stubborn resistance means the general picture is unlikely to change soon.

For gold-mining companies, this is becoming a test of memories. With costs contained even after pandemic-related closures, virtually all are churning out impressive cash: In the first three months, Toronto-based Barrick alone generated $438 million in free cash flow based on a realized price of not far off $1,600, compared to $146 million a year earlier. Valuations look better too, especially for the sector’s largest players.

That’s a temptation to expand for those like Barrick Chief Executive Officer Mark Bristow who are facing constrained production growth and a metal price that’s likely to be supported for some time yet. Recall, though, just how bad things got around 10 years ago, when prices last glittered this brightly. In 2017, chastising the industry, the hedge fund of longtime gold bull John Paulson put the gold mining sector’s cumulative impairments since 2010 at $85 billion. According to the same presentation, 80% of the value of the top eight deals was impaired. Enough to give today’s executive pause.

The starting gun for this wave of gold deals has already been fired. That began with some operational logic and a dash of hubris, when Barrick announced plans to tie up with Africa-focused Randgold Resources Ltd. in 2018, only to bid unsuccessfully for Newmont Mining Corp. months later, when the target was buying Goldcorp Inc. More significant for what comes next, however, is that premiums were non-existent or modest; Barrick and Newmont never did combine, and ended up agreeing a more sensible joint venture in Nevada.

For an industry trying to woo back generalist investors and regain credibility, Chris LaFemina of Jefferies points out, the model is still pre-merger Randgold: a high dividend, net cash, no value-destroying share issues. Shiny prices haven’t changed that yet.

This year it is China’s bullion miners that have driven much of the action, in search of market clout and increased relevance. Shandong Gold Mining Co. agreed to buy Canada’s TMAC Resources Inc. in May, a deal now facing some local opposition, and has also battled Russia’s Nord Gold SE for West Africa-focused Cardinal Resources Ltd. No less acquisitive, Zijin Mining Group Co. agreed last month to buy Canada-headquartered Guyana Goldfields Inc. for $240 million. Expect that to continue.

Paying out the 2020 windfall in dividends may be no bad thing, given how fast gold can turn. Investors will cheer. Still, if prices stay high, diggers can capitalize on the current excitement by encouraging a little more risk to tackle the problem of stagnant production. It’s true that there were as many terrible greenfield projects in the past boom as there were bad M&A deals, but there is an extra incentive to bet on the yellow metal: Extra supply doesn’t tend to erode the gold price.

Miners will need to invest $37 billion by 2025 to keep output at 2019 levels, Wood Mackenzie Ltd. estimates. Not all of those projects will be in top destinations, or easy to extract. Gold at $2,000 might just make a return to mining’s buccaneering roots attractive enough.