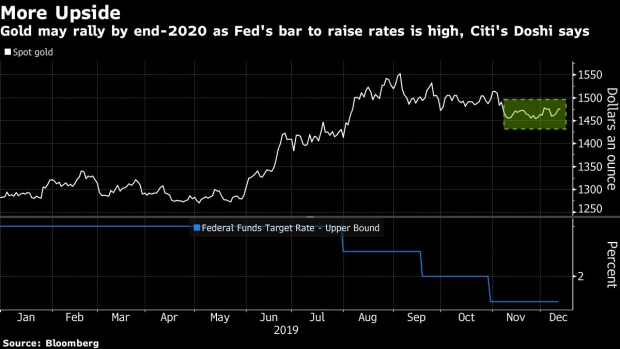 Bars of gold bullion sit underneath a 12.5 kilogram gold bar at the Valcambi SA precious metal refinery in Balerna, Switzerland, on Tuesday, April 24, 2018. Gold's haven qualities have come back in focus this year as President Donald Trump’s administration picks a series of trade fights with friends and foes, and investors fret about equity market wobbles that started on Wall Street and echoed around the world. Photographer: Stefan Wermuth/Bloomberg , Bloomberg

(Bloomberg) -- Gold’s got more room to rally as there’s little possibility of the Federal Reserve raising interest rates in 2020, according to Citigroup Inc.

“The bar for the Fed to hike next year is extremely high,” New-York based director Aakash Doshi said in a phone interview. “With the risks to global growth still to the downside; with inflation still undershooting, not overshooting; and with trade tensions still likely to persist through 2020, we think the bar to cut or to go back to policy easing is lower.”

Bullion is heading for the biggest annual gain since 2010 as central banks globally embraced looser monetary policy to try to boost growth that had been hit by the prolonged trade war. At its final policy meeting of 2019, the Fed left rates unchanged following three consecutive cuts and signaled they would stay on hold through next year. Chairman Jerome Powell said it would take “a significant move-up in inflation” that persisted before he would support any hikes, suggesting that’s quite distant.

“The policy rate is highly unlikely to move higher and the Fed is capping the rise in real medium-term yields, as well as nominal yields, at the belly of the U.S. Treasury curve, so you reduce the opportunity costs of holding gold,” said Doshi. “Potentially, you could see this policy and this bias toward overshooting on inflation as dollar negative. So all three of these factors should be supportive for gold price in the medium term or at least not a major sell off.”

In the bank’s bull case, gold may rally to a record above $2,000 in 2021 or 2022 given broader official sector buying trends as well as the Fed eventually reverting to the zero lower bound.

The biggest risk to gold prices in the very short term is a surprise trade deal between the U.S and China and a significant rollback of tariffs, Doshi said.