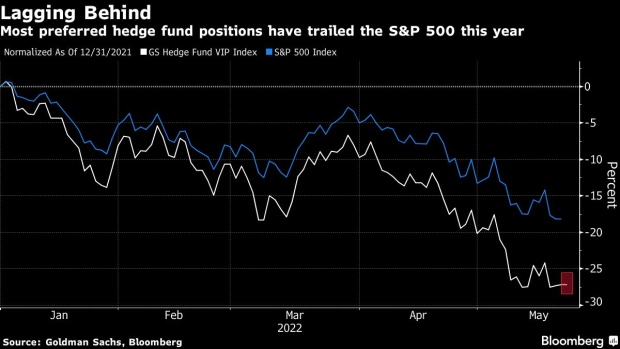 (Bloomberg) -- While hedge funds raced to dump US growth stocks including technology in the first quarter amid expectations of higher rates, they still failed to cushion the returns from the industry’s worst start of a year on record, according to Goldman Sachs Group Inc. strategists.

“A plummeting equity market and the even worse performance of the most popular long positions have led to the worst start of a year on record for hedge fund returns,” strategists led by Ben Snider wrote in a note on Friday. “As a result of these struggles, in recent months hedge funds have accelerated the reduction in leverage and rotation away from growth stocks they began several quarters ago.”

Still, despite the addition of energy stocks to the most popular long positions, tech represents over a third of Goldman’s Hedge Fund VIP list, they said, based on the holdings of 799 hedge funds with $2.4 trillion of gross equity positions at the start of the second quarter. The average equity hedge has returned a loss of 9% so far this year, according to Goldman, which cited HFR data.

Technology stocks, which had fueled the post-pandemic rally in Wall Street’s main indexes, have borne the brunt of this year’s selloff as the Federal Reserve announced monetary tightening. Higher interest rates mean a bigger discount for the present value of future profits, hurting growth stocks with the highest valuations, including tech, and boosting cheap or so-called value shares.

“While recent weeks have been characterized by sharp selling pressures, still-elevated levels of equity exposure across a number of investor groups indicate the risk of more selling if the macro outlook does not improve,” Snider wrote in the note.

Big tech drove much of the reduction in hedge fund positions across tech and discretionary, with funds incrementally rotating away from Apple Inc., Amazon.com Inc. and Tesla Inc., according to the note. Facebook-owner Meta Platforms Inc., Apple, Amazon, Microsoft Corp. and Google-parent Alphabet Inc. -- commonly referred to as the FAAMG group of stocks -- continue to feature within the most popular hedge fund long positions, with Microsoft the most popular long, Goldman strategists said.

More broadly, the strategist sees the rotation in hedge fund positioning reflecting a bigger reallocation across the market, with investors moving away from TINA (There Is No Alternative) to TARA (There Are Reasonable Alternatives) to stocks.

“Today, in contrast, positive real interest rates, growing recession fears, and declining equity prices have signaled to investors that There Are Reasonable Alternatives to stocks,” Goldman strategists said, pointing to household and institutional flows shifting away from equities broadly and from growth shares in particular.

“For hedge funds, this has exacerbated the vicious cycle of falling share prices, declining leverage, and poor liquidity that has created such a challenging market environment this year.”