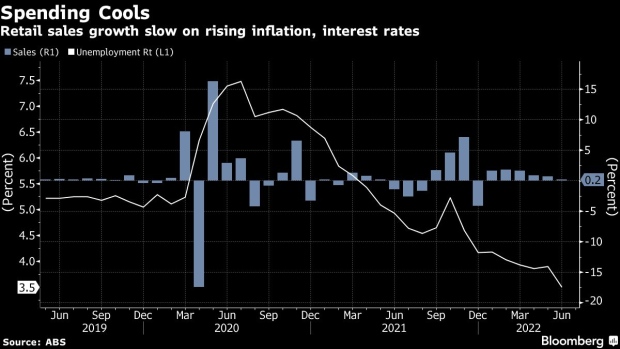 A pedestrian outside the Sydney Opera House in Sydney, Australia, on Wednesday, Dec. 15, 2021. Australian household sentiment declined this month as concerns mounted about the new omicron variant of coronavirus in the nation's recently re-opened eastern states of New South Wales and Victoria. Photographer: Brent Lewin/Bloomberg , Bloomberg

(Bloomberg) -- Goldman Sachs Group Inc. sees a 25% chance of a recession in Australia over the next 12 months and 30-35% odds in New Zealand, while cautioning that a sharp US downturn would lift those probabilities to 50-60%.

Goldman economists reviewed 75 years of data to identify leading indicators of recessions in the antipodean economies and quantify the risks over the next year or so, William Nixon said in a research note Monday.

“Our base case is that Australia and New Zealand will avoid recession,” Nixon said. “We are mindful of downside risks, including recessions induced by some combination of weaker global activity, supply-side inflation and tighter financial conditions.”

Goldman’s model looked at a suite of variables including the spread between 2- and 10-year government bond yields, cash rate, inflation, house prices and business sentiment.

It found that a higher 2-10-year yield spread, an acceleration in headline inflation and a decline in real equity prices all tended to be consistent leading indicators of recessions in the two economies.

Rising interest rates and oil prices also appear to boost the odds of a recession, “although their close correlation with headline inflation mean they don’t provide much additional predictive power,” Nixon said.

“While the model captures global factors indirectly, it’s also true that recessions in Australia and New Zealand tend to be correlated with global recessions -- particular recessions in the United States,” he said.

Australia’s central bank is all-but-certain to lift its key rate by 50 basis points for a third consecutive month on Tuesday to 1.85%, taking its combined tightening since May to 175 basis-points. New Zealand policy makers are tipped by most economists to undertake a fourth consecutive half-point increase later this month, taking the official cash rate to 3%.

The steep pace of hikes has raised the risk of an economic slowdown. Some economists, including at Nomura Holdings Inc, UBS Group AG and Commonwealth Bank of Australia, are predicting rate cuts in Australia will begin as early as next year.

The RBA will publish a quarterly update of forecasts on Friday that’s widely expected to show downgrades to economic growth and employment and a sharp increase in the inflation outlook -- in line with Treasury’s outlook last week.