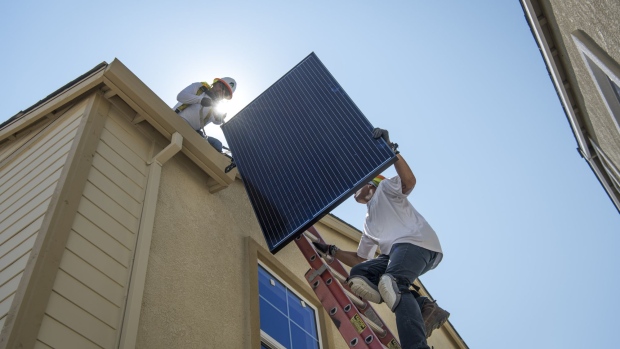 Contractors move a SunRun Inc. solar panel up a ladder to the roof of a new home at the Westline Homes Willowood Cottages community in Sacramento, California, U.S., on Wednesday, Aug. 15, 2018. California is the first state in the U.S. to require solar panels on almost all new homes as part of a mandate to take effect in 2020. Photographer: David Paul Morris/Bloomberg , Bloomberg

(Bloomberg) -- GoodLeap LLC, one of the biggest U.S. providers of financing for residential solar systems, received $800 million in backing as it further expands into sustainable home improvement.

The San Francisco-based company, now valued at $12 billion, will use the new investment to also eventually move into commercial projects and electric vehicles, according to an emailed statement Wednesday. The round was led by MSD Partners and also included BDT Capital Partners and Davidson Kempner.

GoodLeap has deployed more than $9 billion of capital since 2018 for solar and other sustainable-home improvement projects. It changed its name in June from Loanpal as it pushed further into sustainable home upgrades, a market the company estimates at $430 billion a year. Its system connects lenders with installers and consumers.

“Our technology is fundamentally reshaping how the sustainable improvement industry can operate by removing friction between consumers, installers, manufactures, and financial institutions,” Chief Executive Officer Hayes Barnard said in the statement.