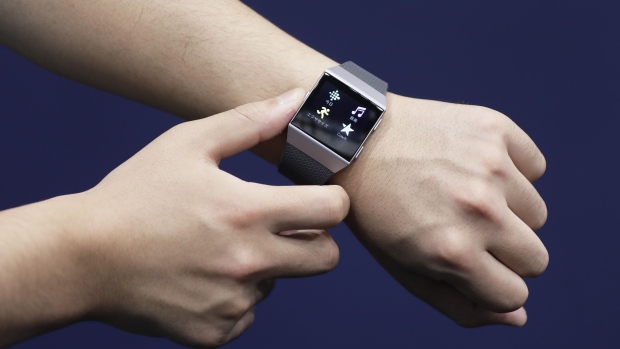 An attendant shows a Fitbit Inc. Ionic smartwatch for a photograph at the Wearable Expo in Tokyo, Japan, on Thursday, Jan. 18, 2018. , Kiyoshi Ota/Bloomberg

The European Commission said Google’s pledge to maintain access for rival health and fitness apps and device makers for 10 years removed its concerns about the company’s move into health data and devices. Smaller rivals previously complained that the company’s promises might not go far enough to stop Google shutting off access in future to rival products or services.

“The commitments will determine how Google can use the data collected for ad purposes, how interoperability between competing wearables and Android will be safeguarded and how users can continue to share health and fitness data, if they choose to,” Margrethe Vestager, the EU’s antitrust chief, said in a statement Thursday.

Approval comes in a harsh climate when Google and others are facing mounting scrutiny of acquisitions that help them push into new areas. Google announced its plans to buy Fitbit in November 2019, describing the bid for the smartwatch maker as a boost to its lagging hardware business.

Mountain View, California-based Google said it understood “that regulators wanted to look closely at this transaction, and we have worked constructively with them to resolve their concerns, including the set of legally binding commitments.”

Its promises “build on assurances we have made since the beginning that we are committed to protecting Fitbit users’ privacy and will continue to invest in and support manufacturers and developers,” the company said.

Google pledged not to use Fitbit’s data about users’ health and fitness for online advertising and to store Fitbit’s data separately from its ad services. The company will ensure that European users can grant or deny Google access if they want Google services to link up with Fitbit information. The EU said it can extend this pledge for an extra 10 years if necessary “because of Google’s entrenched position in the market for online advertisement.”