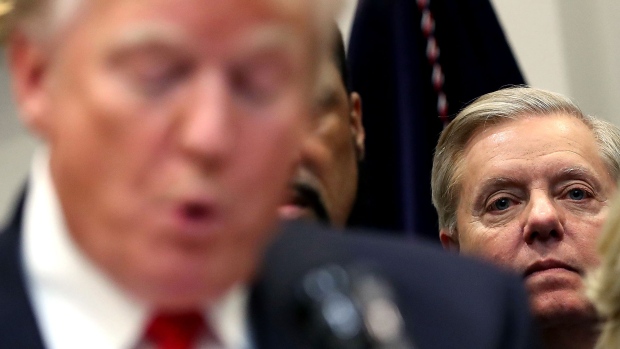 (Bloomberg) -- Republican Senator Lindsey Graham will fight a Georgia prosecutor’s subpoena seeking his testimony for a probe into possible interference with the 2020 election results there, Graham’s attorneys said in a statement.

“In my conversations with Fulton County investigators, I have been informed Senator Graham is neither a subject nor target of the investigation, simply a witness. This is all politics,” attorneys Bart Daniel and Matt Austin of Nelson Mullins said.

The attorneys characterized the county investigation as a “fishing expedition” done in coordination with the House Jan. 6 Committee.

“Should it stand, the subpoena issued today would erode the constitutional balance of power and the ability of a Member of Congress to do their job. Senator Graham plans to go to court, challenge the subpoena, and expects to prevail,” the statement says.

Graham was justified in inquiring about the voting in Georgia because he was chairman of the Judiciary Committee, according to the statement.

Fulton County District Attorney Fani Willis is investigating attempts by former President Donald Trump and his supporters to change the result of the 2020 election in Georgia, according to court filings.  Georgia Secretary of State Brad Raffensperger has already testified in the matter.

Graham, of South Carolina, called Raffensperger on Nov. 13, 2020, expressing concern about absentee ballots, according to Raffensperger’s autobiography “Integrity Counts.” Graham “seemed to be concerned that some counties might have approved absentee ballot signatures that should have been marked invalid,” Raffensperger wrote.

The grand jury was impaneled in early May at Willis’s request and began hearing testimony in early June. The subpoenas issued Tuesday mark the first time members of Trump’s inner circle have been summoned to testify in the grand jury probe.