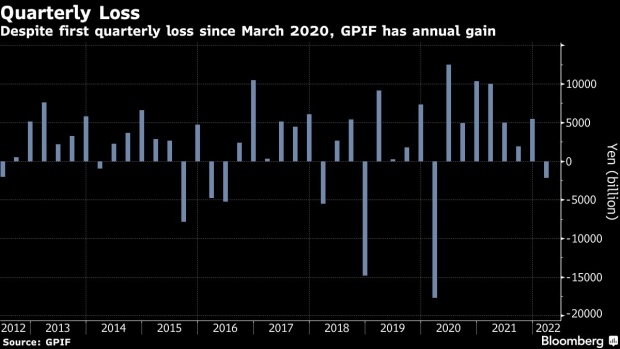 (Bloomberg) -- The world’s biggest pension fund posted a gain for a second consecutive fiscal year as overseas stocks advanced and strength in the dollar versus the yen helped boost the value of its assets abroad.

In what was otherwise a strong fiscal year, the fund had a loss during the January-March quarter, the first under the watch of GPIF President Masataka Miyazono since he took the top post in April 2020 in the wake of a pandemic-induced global equity rout. Total assets shrank for the first time in two years, dropping from a record high of 199.3 trillion yen at the end of December.

“We had a 5.42% gain for the fiscal 2021 due to sharp rises in foreign equities and a weakening yen,” Miyazono said in a statement. “Although German shares dropped due to the war in Ukraine and a resurgence of the coronavirus pandemic, strong performances in the US stock market helped overall foreign equities.”

The GPIF’s holdings of Japanese debt, which once made up more than a third of its assets, had the worst annual performance since the year ended March 2006 as bets on rate hikes in the US put Japan’s so-called super-long bonds under pressure. Japan’s public pension funds collectively scooped up a net 160 billion yen of overseas securities in the January-March period, while buying three times the amount of Japanese government bonds, according to central bank data.

For the three months ended March, the fund had a 1.1% quarterly loss. Japanese stocks lost 1.2% during the period. Foreign stocks lost 0.6%, while domestic and foreign debt lost 1.5% and 1.2%, respectively. The GPIF wrote off its Russia-related holdings as information on the assets was hard to obtain, it said.

The GPIF has a general target to keep its basic portfolio evenly allocated into four asset classes consisting of stocks and bonds, foreign and domestic. Alternative assets accounted for 1.07% of GPIF holdings, below the allowable limit of 5%. The fund holds the majority of its stock investments in strategies that track indexes.