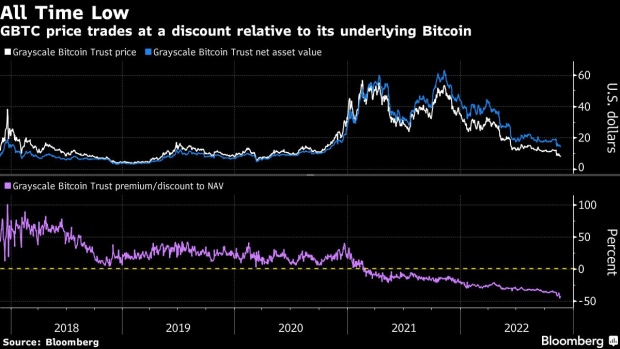 Catherine Wood, chief executive officer of ARK Investment Management LLC, speaks during the Bitcoin 2022 conference in Miami, Florida, U.S., on Thursday, April 7, 2022. The Bitcoin 2022 four-day conference is touted by organizers as "the biggest Bitcoin event in the world." , Bloomberg

“We know that the Grayscale Investment trusts are the most valuable part of that company right now, and they’re cash cows,” Wood said in a Bloomberg Television and Radio interview on Tuesday. “We think they’re going to try and hold onto that if nothing else.”

The comments from Ark’s chief executive come as beleaguered cryptocurrency brokerage Genesis searches for fresh capital to stave off a potential bankruptcy after halting withdrawals last week in the wake of FTX’s stunning collapse. Genesis’s ordeal has thrown the health of parent company DCG into question and it’s clear that Grayscale is the sturdiest part of the business, Wood said.

Wood has been a buyer of Grayscale Bitcoin Trust, known as GBTC, even as the trust sinks to a record discount relative to its underlying Bitcoin. The ARK Next Generation Internet exchange-traded fund (ticker ARKW) has purchased GBTC shares three separate times already this month for the first time since July 2021. While the discount has punished long-term holders of the trust, the gap should narrow over time and there’s “a lot of upside,” Wood said.

Roughly $10 billion sits in GBTC, and Bloomberg Intelligence estimates that the trust holds more than 3% of all mined Bitcoin. Last week, Grayscale released a letter from Coinbase Global  Inc. Chief Financial Officer Alesia Haas saying that the trust’s coins are in cold storage and can’t be lent out. While FTX’s blowup has heightened jitters among crypto investors, Wood is “comfortable” with GBTC’s custody arrangements.

“We had to do our homework on it and we know that all of the Bitcoin behind GBTC is in cold storage at Coinbase, and Coinbase has confirmed this,” Wood said. “So we feel quite comfortable with it here.”

Broadly, Wood said she expects Bitcoin to emerge stronger than ever from the crypto conflagration ignited by FTX.com, likening the collapse to Bernie Madoff’s infamous ponzi scheme. She’s sticking by her bullish forecast of $1 million for the coin by 2030, citing the underlying technology of digital-assets. Bitcoin edged back above $16,000 in New York as of 5:00 p.m.

“Well we always look for the ‘whale’ in a situation like this and if there was a whale out there, it was FTX and Sam Bankman-Fried, king of the hill, she said. “I’m sure there’s going to be more fallout.”

The quick demise of FTX sent shockwaves not just in the crypto industry but also in Wall Street. Several venture capital firms, including prominent ones such as Paradigm, BlackRock Inc. and Tiger Global Management had backed the firm only to be publicly humiliated following the collapse. Sequoia Capital, for instance, wrote down the full value of its multi-million bet on the exchange and apologized to its investors.

“The thing that is shocking is how many people were very close to him and one would have presumed looked at all of the documents and got a sense of the books,” Wood said.  “I think he had this aura around him or something that caused people to ask fewer questions than might otherwise been the case. It’s very hard to understand.”

Wood noted she only had one interaction with Bankman-Fried via video call ahead of an April conference.

--With assistance from Tim Stenovec and Carol Massar.