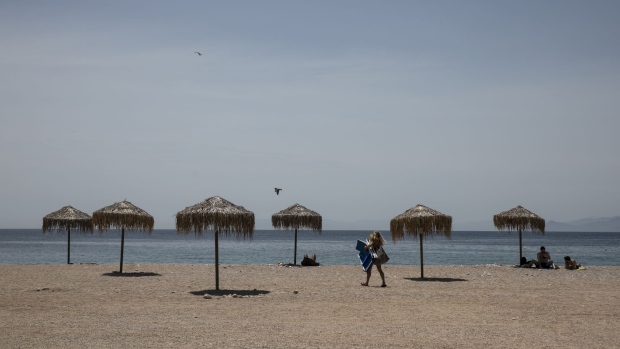 A woman carries a sunbed onto the beach at Glyfada suburb, near Athens, Greece, on Wednesday, May 5, 2021. Tourism is one of the country’s most important industries, accounting for about a fifth of the economy and more than a quarter of jobs. Photographer: Yorgos Karahalis/Bloomberg , Bloomberg

(Bloomberg) -- Greece is moving ahead with its program to recover from the economic fallout of the pandemic even before initial funding arrives from the European Union, Finance Minster Christos Staikouras said.

“We are among the first countries to submit our program and we’ve already started to implement some of the reforms and investments,” Staikouras said in an interview in Athens.

The government of Prime Minister Kyriakos Mitsotakis is ready to start labor market reforms, while projects such as providing tablets and laptops to students are already up and running. Rather than waiting for the initial disbursement of EU funds expected by the end of the summer, Greece is “covering initial costs with our own resources,” Staikouras said.

For Greece, there is a lot at stake. The government is betting its recovery plan will help the country overcome “the large investment gap observed during the financial crisis years, which deteriorated further during the pandemic,” the minister said. Greece’s economy shrank 8.2% in 2020 under the weight of the pandemic, coming in the wake of the country’s mammoth 25% contraction over the last decade as a result of its debt crisis.

Mitsotakis’s government forecasts 3.6% growth this year and 6.2% in 2022, as help comes in the form of the European funds and supportive fiscal policy for next year. Athens is also looking to the continuation of the European Central Bank’s pandemic emergency purchase program, known as PEPP, and a successful vaccination program as drivers for growth.

The goal is to reinvent the country by building a more outward-looking, resilient, inclusive, digital and green economy, the minister said. Once normal conditions have been reestablished, “our intention is to continue a prudent, balanced and sound fiscal policy, which includes permanent reductions in taxes and social insurance contributions,” Staikouras said. Still, he made clear that Greece will at the same time have “reasonable” primary surpluses in the future.

S&P Global Ratings recently upgraded Greece’s status, but the country still needs time to re-enter the investment grade zone in order for the ECB to continue accepting Greek bonds when the PEPP is over.

“The Greek government will take all the necessary initiatives and make all necessary decisions to preserve and improve, in all aspects, the current status of all its government securities,” Staikouras said.

The ECB acted properly in dealing with the pandemic and with Greece, “which is something that we are pretty sure will continue,” the minister said

One major challenge ahead: bad loans and their effect on the country’s banking industry. Greek lenders have a huge stock of soured debt, which at its peak exceeded 100 billion euros ($122 billion). While the figure fell to 47 billion euros at the end of 2020, the country’s non-performing exposure ratio is still the highest in the EU.

Athens has already decided on an 18-month extension for its Hercules program, which provides state guarantees to help lenders further reduce bad loans.

“It is highly likely that some systemic banks will reach a single digit NPE ratio by December 2021 and all systemic banks in 2022,” Staikouras said. The government could consider introducing another systemic solution such as the creation of a bad bank as the Bank of Greece has proposed, “only after taking into consideration the remaining stock of NPLs, along with possible fiscal implications,” the minister said.