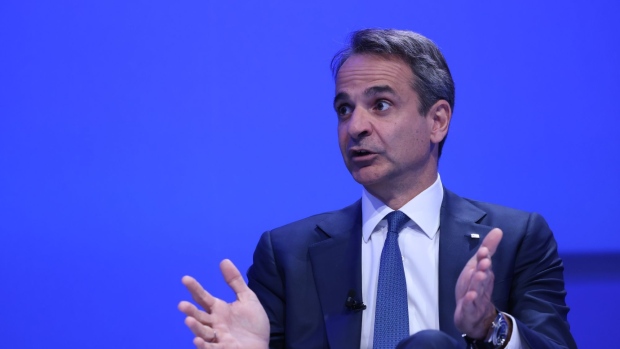 (Bloomberg) -- Prime Minister Kyriakos Mitsotakis said he was unaware that Greece’s national intelligence service monitored the mobile phone of an opposition politician, and the premier pledged to reform how the unit is supervised.

“What was done, may have been in accordance with the letter of the law, but it was wrong -- I was not aware of it and obviously I would have never allowed it,” Mitsotakis said in a statement on Monday. Mitsotakis said he only learned of the phone tap a few days ago.

The head of Greek intelligence, Panagiotis Kontoleon, resigned last week following a “mishandling of legal surveillance operations,” the prime minister’s office said at the time. Kontoleon told a parliamentary committee that his agency had monitored a journalist, Reuters reported last week week, citing two sources who said they were present at the meeting.

Adding to the turmoil in Athens, Grigoris Dimitriadis, the general secretary of Mitsotakis’s office and the premier’s nephew, quit the same day. Neither Dimitriadis nor the government provided a reason for the decision.

Mitsotakis said he asked for the resignation of Kontoleon while Dimtiradis assumed the political responsibility while the case highlighted the lack of additional “filters” in the operation of the intelligence services. The government agreed to establish a commission to investigate the matter, he said.

A type of spyware called Predator was deployed against Nikos Androulakis, the leader of Greece’s opposition socialist Pasok party, and journalist Thanasis Koukakis, according to a forensic analysis by digital rights group Citizen Lab and the European Parliament. A Greek government spokesman denied the use of the Predator software.

The surveillance of Androulakis -- a member of the European Parliament -- was legal and carried out before he was elected leader of the Pasok party in December, government spokesman Ioannis Oikonomou told Skai TV on Monday. He added that it was “politically unacceptable” for the mobile phone of an elected representative to be monitored.

The case has nothing to with the discussion about Predator and malicious software, Oikonomou said. “The Greek security forces, the Greek government has neither procured, nor does any government authority use in any way, directly or indirectly, this notorious malware,” he said.

Oikonomou added that Greece would not go to early elections over the issue. Mitsotakis said in his address that the government would reevaluate the supervision of the intelligence services and strengthen its accountability by parliament.

A report from Google’s Threat Analysis Group published in May suggested that the Predator software is routinely used by “government-backed actors” in nations including Greece, Egypt, Indonesia and Spain.

Androulakis filed a complaint July 26 with a prosecutor saying that someone had tried to tap his mobile phone and intercept personal data. Koukakis has alleged that his smartphone was infected with surveillance software, prompting a separate investigation by a prosecutor.