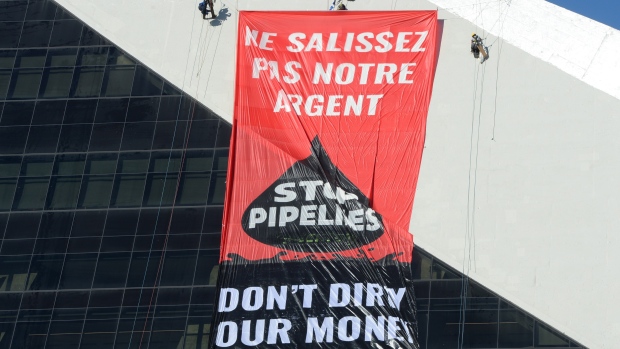 MONTREAL -- At least three Greenpeace members climbed the outside of the Olympic Stadium tower in Montreal on Thursday to protest the Trans Mountain pipeline.

The climbers, who were equipped with cables and harnesses, began their ascent just after dawn.

They said they planned to unfurl a banner at the top of the 165-metre-tall structure as a message for Prime Minister Justin Trudeau.

As of 8:40 a.m., the climbers were about 60 metres off the ground and began to unroll their sign, which read, Stop Pipelines, Don't Dirty Our Money.

Police cordoned off the area below, and tourists and employees were barred from the stadium.

Montreal police spokeswoman Caroline Chevrefils said the Greenpeace members would be arrested for public mischief once they were back on the ground.

The federal government recently said it would spend $4.5 billion to take over the Trans Mountain project.