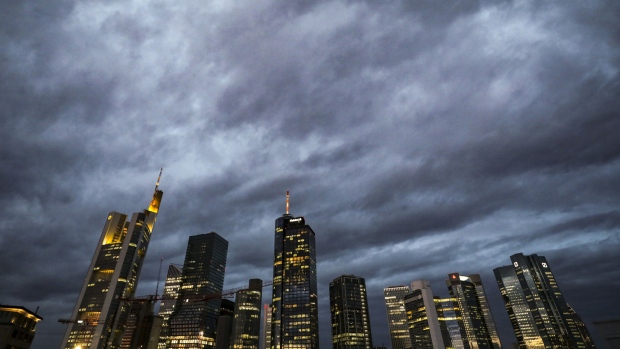 Skyscrapers including the Commerzbank AG headquarters, left, and twin tower headquarters of Deutsche Bank AG, right, stand illuminated at sunrise in the financial district of Frankfurt, Germany, on Monday, Oct. 21, 2019. U.K. Prime Minister Boris Johnson is making a fresh bid to deliver on his promise to take Britain out of the European Union on Oct. 31 amid mounting optimism that he now has the backing to get his deal through Parliament. , Bloomberg

(Bloomberg) -- More than half of the world’s banks are too weak to survive a downturn, according to a survey from consultancy McKinsey & Co.

A majority of banks globally may not be economically viable because their returns on equity aren’t keeping pace with costs, McKinsey said in its annual review of the industry released Monday. It urged firms to take steps such as developing technology, farming out operations and bulking up through mergers ahead of a potential economic slowdown.

“We believe we’re in the late economic cycle and banks need to make bold moves now because they are not in great shape,” Kausik Rajgopal, a senior partner at McKinsey, said in an interview. “In the late cycle, nobody can afford to rest on their laurels.”

The decade since the global financial crisis has seen a wave of innovation in financial services, bringing new competitors from fintech startups to giants like Apple Inc. and Alphabet Inc.’s Google. Banks have pondered whether to compete with, partner with or acquire some of these newcomers. Some established firms have sought to rebrand as technology companies, in part to attract hard-to-get talent.

McKinsey, whose clients are some of the biggest corporations in the world, consults on topics ranging from strategy and technology to mergers & acquisitions, outsourcing and stock offerings. In its report, the firm said banks risk “becoming footnotes to history” as new entrants change consumer behavior. Most recent attempts by banks to boost efficiency have been “business-as-usual,” it said.

Banks allocate just 35% of their information-technology budgets to innovation, while fintechs spend more than 70%, McKinsey said. Combined with regulatory factors lowering the barrier to entry -- like open banking and looser requirements for startups -- the environment is increasingly conducive for newer firms to take share from banks.

The report points to Amazon.com Inc. in the U.S. and Ping An in China as examples of technology firms that are capturing financial-services customers. To make matters worse for the old guard, the new players tend to go after the business areas that create the highest returns at banks -- credit cards, for example.

Lenders can cut costs and find funds for technology by outsourcing what McKinsey calls “non-differentiating activities,” including some trading and compliance functions. Banks “need to get much more comfortable with external partnerships and being able to leverage talent externally,” Rajgopal said.

Another way to free up money: get bigger. BB&T Corp. and SunTrust Banks Inc. said as much when they announced their decision to combine earlier this year -- the biggest U.S. bank merger since the financial crisis. Rajgopal said he expects M&A to continue in the late cycle.

“Going forward, scale will likely matter even more as banks head into an arms race on technology,” the report says.